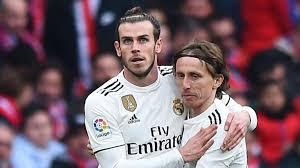 Real Madrid will be without both Gareth Bale and Luka Modric for this weekend’s Liga match against Real Mallorca, Zinedine Zidane confirmed on Friday.

Modric and Bale both picked up injuries during the Euro 2020 qualifier between Croatia and Wales on Sunday, which finished 1-1.

Wales coach Ryan Giggs suggested after the match that Bale was suffering from cramp in his calf but the forward has not trained with the rest of the Madrid squad this week.

Madrid meanwhile confirmed on Wednesday that Modric is recovering from heavy bruising in his right thigh.


“Modric is not fit for tomorrow,” said Zidane in a press conference ahead of Saturday’s game against Mallorca.

“Gareth Bale is not going to be with us, neither Toni Kroos nor Lucas Vazquez. We have to accept it. There are other players.”

Kroos injured his foot playing for Madrid against Granada before the international break while Vazquez has a calf problem.

Madrid sits top of La Liga, two points above Barcelona, and remain the only unbeaten team in the division.