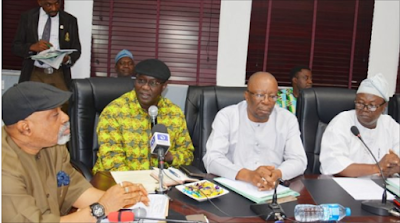 The President of Trade Union Congress, Quadri Olaleye, said organised labour would not go on a warning strike before the main industrial action, if government failed to meet workers’ demand on the implementation of the new minimum wage by the close of work on Wednesday, October 16, 2019.

In a communiqué issued at the end of a meeting of leaders of labour unions on Tuesday in Abuja, organised labour had said it would not guarantee industrial peace in Nigeria, if the Federal Government failed to hold a meeting with labour and accept its demand on the consequential salary adjustment arising from the new minimum wage.

The communiqué said the alleged nonchalant attitude of the government negotiating side had dragged negotiations for consequential wages adjustment unduly, adding that Nigerian workers had exercised tremendous patience and restraint already.


In an interview with our correspondent on Friday, the TUC president said already, labour had begun to mobilise its members for industrial action before the Tuesday ultimatum issued to government.

He said, “We had already begun mobilisation of our members for an industrial action long before we made the pronouncement. We have given instructions on mobilisation to our members in the states and all council areas.

“If by October 16, government fails to do what we expect from it, we will start our action with a rally. On the second day (October 17), the strike will begin.

“We are not going to give any warning strike this time round. We have threatened to go on strike on many occasions. The public can attest to this through media publication and letters to government.”

Meanwhile, Secretary of the Joint National Public Service Negotiating Council, Alade Lawal, said despite the ultimatum issued, government had yet to contact labour on a date for a meeting.

He also berated government for taking too long to constitute a new team that would begin another round of negotiation with labour on the new minimum wage.

Lawal said, “If they want to constitute a new team, must that take a year? It takes less than a day to do that since supposed members are members of the government cabinet. As far as we are concerned, government has not reached out to us.”

Doctors will not strike –NMA

However, President of the Nigerian Medical Association, Festus Faduyile, has ruled out the possibility of doctors joining the strike. In an exclusive interview with our correspondent on Friday, Faduyile said the NMA sympathised with Nigerian workers on the failure of government to fully implement the new wage structure, but added that doctors would continue to cater for patients in various government hospitals across the country.

“It is not likely that we will go on strike but that does not mean that we do not stand with the organised labour on this matter.”

Our books on income, expenditure open, FG tells labour
The Federal Government has called on organised labour to send its representatives to look into income and expenditure books.

It said this became important because of the plan of labour to go on strike.

Minister of Labour and Productivity, Sen Chris Ngige, who spoke with one of our correspondents through its Special Adviser on Media, Mr Nwachukwu Obidiwe, said he had always taken the labour into confidence in all decisions taken on the issue of minimum wage.

He said with the situation of economy, everyone must be ready to make sacrifice.

He said, ‘‘The FG has promised to open its books to labour to come and look at its income and expenditure. They are free to send representatives to carry out the task. This time calls for sacrifice. Every step the minister has taken so far has been in the interest of the nation.’’