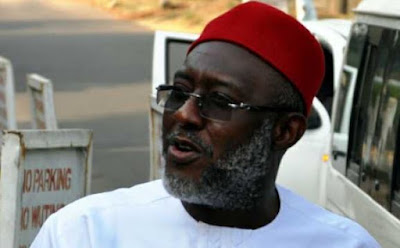 He had called 15 witnesses to prove his innocence of the money laundering charges brought against him by the Economic and Financial Crimes Commission, EFCC.

The EFCC is prosecuting Metuh alongside his company, Destra Investment Limited, on seven-count charges bordering on money laundering to the tune of N400 million(Four Hundred Million Naira), which he received from the Office of the National Security Adviser in the lead up to the 2015 general election.

The court had in 2018 issued an order for Metu to close his case, but had to vacate it to enable him call more witnesses.


At the court session on Friday, September 27, 2019, Metuh, who is the 15th witness in his matter, told the court under cross-examination by the prosecution counsel, Sylvanus Tahir, that there was never an instance where former President Goodluck Jonathan directly gave any money to him, saying that his collection of N400 million (Four Hundred Million Naira) from Col. Sambo Dasuki (former NSA) was for a national assignment as directed by the then president.

At Wednesday’s trial, the prosecution counsel presented a Diamond Bank document which captured the details of the transactions carried out by Metuh and his company, Destra Investment Limited.

The defence counsel indicated a desire to cross-examine Metuh on the tendered documents but the prosecution objected on the grounds that the matter was not a fresh charge.

Destra Investment’s counsel, Mr Tochukwu Onwugbufor argued that the prosecution had turned Metuh into its witness by introducing new evidence, that he was entitled to cross-examine Metuh on the bank documents. But Tahir opposed the application, arguing that it was misconceived and not supported by provisions of the Evidence Act.

Justice Abang, relying on sections 215(3), 216 and 217 of the Evidence Act, upheld the argument of the prosecution and refused the application of the defence counsel to cross examine Metuh.

According to the Judge, Section 216 of the Evidence Act was of no assistance to the defence, while Section 217 was of no relevance, noting that the defence cannot argue that the document contained fresh issues to alter provisions of the Evidence Act. He further stated that it was not mandatory for counsel of the second defendant (Destra Investment) to cross-examine Metuh on the bank documents, saying such can only happen at the discretion of the court.

Justice Abang adjourned the matter to October 7, 2019, for continuation of trial and for other pending applications to be heard.