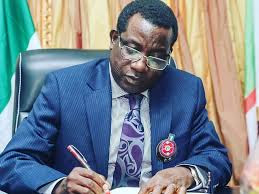 Plenary at the Plateau State House of Assembly was on Wednesday disrupted and the house adjourned unceremoniously to avoid violent clash among members.

It was gathered that the crisis started when the Speaker of the House read out a memo sent to the House by Governor Simon Lalong.

Lalong was requesting the House to approve the appointment of new Management Committee in four local governments.

The House immediately became divided as soon as the memo was presented as the majority APC members and minority PDP could not agree on the request of the Governor.

It was also gathered that the PDP members opposed the decision of the Governor based on Section 7, subsection (1) and (2) of the 1999 Constitution which allows for democratically elected Local Government chairmen at the LGA level.

The PDP Lawmakers also described it as “rape on democracy”.

But the Speaker, Rt. Hon. Ayuba Abok and all the APC members insisted the House must endorse the executive memo.

The next action that followed was that the PDP members in the House staged a walkout from the chambers in Protest.

Minority leader of the House and member representing Barkin Ladi Constituency, Hon. Peter Gyendeng accompanied by all the PDP members told journalists that, the action of their colleagues in approving the appointment of the APC candidates is not only illegal but undemocratic and full-blown dictatorship gearing towards disenfranchising the people by denying them the right and liberty to choose their representatives.

“We the PDP members want to make it clear that anything short of the rule of law and due process from the APC led government in this regard will not only be vehemently rejected but will be fought to a standstill.

However, the Plateau State Chapter of the Peoples Democratic party, (PDP) through its Publicity Secretary, Hon. John Akans said the action was undemocratic and an act of illegality and injustice, adding that it will be resisted by the people of Plateau State.

“As a party that believes in the rule of law and also that represents the interests and mandates of majority votes on the plateau, we are on this note sending a very strong word of caution to Plateau State Independent Electoral Commission (PLASIEC), APC and the state government that any undemocratic act of illegality and injustice will face appropriate resistance from the people of Plateau State.

“This illegal act will no longer be tolerated by the people, as they have had enough of this oppression by ungodly minds which are filled with ungodly values by an architect of injustice in leadership position.

Despite the protest by the opposition party, the appointed management committee was inaugurated at the Banquet Hall of government house, Rayfield – Jos by Gov Lalong.

Reacting to the action by the State Assembly, a former member of the House of Representatives, Hon. Bitrus Kaze, said, “I wish to join all men and women of goodwill on the Plateau, particularly within the PDP family in commending the PDP legislators in the Plateau State House of Assembly for standing tall in the face of intimidation following Gov Lalong’s memo requesting the house to approve the appointment of new Management Committee in four local governments.

Kaze said, “By staging a walkout on the floor of the House yesterday, you defied all manner of intimidation and defended our democracy and the interest of your people to the best of your ability.

“In my view, you made us proud, you have simply written your names in gold and posterity will be kind to you.

“Rather, unfortunately, destiny has placed on your broad shoulders the burden of our people. You have unwittingly become the symbols of our collective struggle but the battle is not over,” he stressed.