Khashoggi memorial to be held outside Saudi consulate where he died 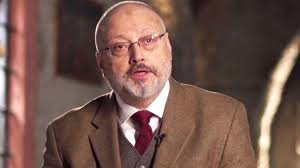 Jamal Khashoggi’s friends, rights activists and press freedom groups will hold a memorial in Istanbul on Wednesday outside Riyadh’s consulate, where the Saudi journalist was murdered.

The event on the first anniversary of his death will begin at 1:14 pm (1014 GMT), the exact time Khashoggi walked into his country’s diplomatic mission to get documents to marry his Turkish fiancee Hatice Cengiz.

Cengiz, 37, will return to the building where she waited outside for him for several hours a year ago, before raising the alarm of his disappearance.

Turkey says Khashoggi was murdered and dismembered by a Saudi hit squad after he entered the consulate.


The scheduled attendees at the service include UN special rapporteur on extrajudicial killings Agnes Callamard, who investigated the murder, and Yemeni Nobel peace laureate Tawakkol Karman.

No one has been held accountable for Khashoggi’s death; although Turkish and Western intelligence agencies say the order to kill him could only have come “from the highest levels of the Saudi government.”

The kingdom’s de facto ruler, Crown Prince Mohammed bin Salman, told U.S broadcaster CBS that he did not order the murder, but took “full responsibility as a leader in Saudi Arabia.”

Callamard responded on Twitter: “There is in this statement an implicit recognition that the killing of [Khashoggi] was a State killing.

”It happened under his watch as quasi head of state. The State is therefore implicated as he is.”

Cengiz said that although Khashoggi disagreed with the crown prince and the kingdom, by killing him “they are now faced with much greater problems.

”They’re going to pay the price for this.” Khashoggi’s remains were never found.