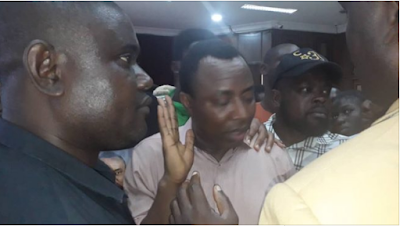 A federal high court in Abuja has partially reviewed conditions of the bail granted to Omoyele Sowore, convener of the #RevolutionNow Movement.

The court had earlier granted a N100 million bail to Sowore with two sureties who must be resident in Abuja and have landed properties within the federal capital territory.

The court had held that the sureties must deposit original documents of those properties in the court registry.

The judge also ordered that one of the sureties must deposit N50 million with the court pending the determination of the case.

While barring Sowore from travelling outside Abuja, she ordered him to deposit his passport with the court.

But at the court on Monday, Ijeoma Ojukwu, the trial judge, set aside the previous order on Sowore’s surety depositing N50m, holding that the surety could deposit N30 million.

She also reduced the bail sum of Olawale Bakare, Sowore’s co-defendant to N30m instead of the initial N50m

She refused to vary all the other conditions for bail.

Femi Falana, Sowore’s counsel, had approached the court seeking a variation to the previous bail conditions which he said were stringent, thus, could not be met.

The federal government had charged him with treasonable felony, “insulting” President Muhammadu Buhari and money laundering.