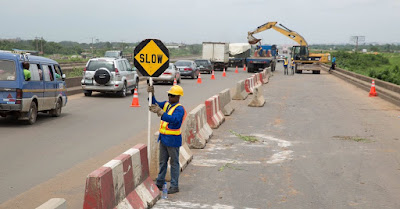 The Federal Road Safety Corps has said that Julius Berger on Friday said that it intends to extend the reconstruction work on Lagos-Ibadan Expressway from Magboro to The Punch Newspaper section of the road from October 21 to January 31, 2020.

Mr Clement Oladele, Ogun Sector Commander of FRSC, told the News Agency of Nigeria in Ota, Ogun State, that the development was to enable the company to begin rehabilitation work on the 1.3 kilometres stretch of the Expressway from Magboro to Punch newspaper building from Monday.

Accordingly to him, the rehabilitation work will cause a temporary diversion of the Lagos bound traffic to the Sagamu bound carriageway from Magboro.


“This temporary diversion of traffic will transfer the Lagos inbound traffic to the same carriageway conveying traffic outward Lagos.

“Thereby making both the traffic inward and outward Lagos accommodated on the same section of the expressway within the 1.3 kilometres stretch of the road from Magboro to PUNCH in Ogun State,” he said.

NAN reports that there has a partial closure of the Lagos end of the expressway from September 2 for the reconstruction work on the 600-metres stretch between Ojodu Berger and the beginning of Kara Bridge.

The sector commander advised motorists to take note of the development and plan their trips by allowing more time for their travelling time, in view of the construction work that would narrow the carriageway which may impair traffic.

“Motorists are also enjoined to observe lane discipline and avoid driving against traffic, as violators risk their vehicle being impounded and liable to payment of N50,000 naira traffic fine,” he said.

The FRSC boss cautioned motorists to drive within the maximum speed limit of 50km per hour, the maximum speed at construction zones as prescribed by the National Road Traffic Regulations, 2012, to avoid road crashes.