‘I was raped by five men, aborted three times– inmate of Kwara ‘rehab centre’ where 108 were rescued laments 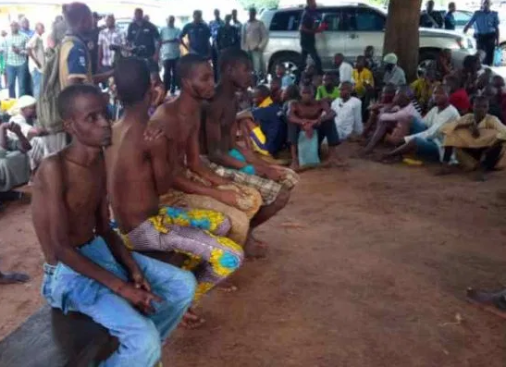 Olaide Arikewuyo, one of the female inmates, alleged that she was sexually abused by the uncle of the owner of the centre. She said she has had three abortions as a result of the abuses.

“I am living with the owner of the centre in their apartment and the uncle used to have carnal knowledge of me every night,” she said.

“Since I have nobody to turn to and it is not easy to escape from there. I have been abused by five men.

“In the process, I got impregnated and had three abortions. I just thank God that the police came to my rescue.”

Kayode Egbetokun, the state commissioner of police, disclosed the recent effort while speaking with journalists on Thursday.

Egbetokun said the command acted on a tip-off and raided the centre where the inmates comprising 103 males and five females were detained under inhuman conditions.

This is coming a day after 15 inmates were rescued at a rehabilitation centre in Adamawa. On Tuesday, security operatives raided a religious centre in Zaria, Kaduna state, rescuing 11 inmates.

Earlier in Kaduna, 147 inmates were set free by the police after a raid on another religious rehabilitation centre in the state.

“Some of the victims were observed to have some forms of infections and diseases and were not treated while some others were mentally ill,” Egbetokun said.

“Some of them, during the interview, claimed they were brought to the centre by their parents.”

The CP said the police command would take care of the victims until their parents come to get them, adding that investigation into the case was in progress.

Waliyu Aliu, one of the victims, said he was taken to the centre because of his addiction to marijuana.

He said his parents believed he would stop taking the drug after spending some months in rehab.

Abdulazeez Korede, another victim, said: “my parents brought me there because I am a drug addict and they want to stop me from taking hard drug.”

“But to my surprise, I was chained and beaten up mercilessly and taken underground where other guys like me were kept when my parents left.

“I was kept in a dungeon for four months where there was no sunlight or window and no proper food.”

Tope Owonifari, an inmate, said the owner of the centre collects N15,000 monthly from his parents as his food allowance but “I was not given proper meal”.

“The owner of the centre charged my parents N200, 000 for the treatment and I have spent four days here which is like four years to me,” he said.