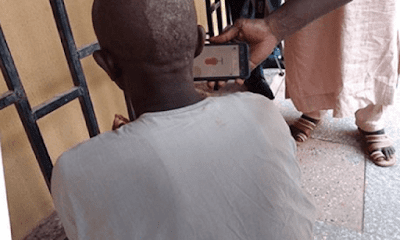 A man, identified as Mohammed Babangida, 30 years old has been arrested for allegedly defiling a 9-year-old girl in Adamawa State.

The man was picked up for the offence by the Nigeria Security and Civil Defence Corps (NSCDC), following intelligence report from residents.

Babangida, who responded to questions from newsmen, said he had given the girl N50 and N20 on two occasions and it was on the third occasion when he gave her N50 that he attempted to rape her.


“I started but I did not finish,” he said, adding that someone knocked on the door and that was how it ended.

He asked for leniency, saying, “I have not done it before and I will not try it again. I have wife and children. Government should pity me and not ruin my family.

“I want to beg for forgiveness as a married man with children based in Bauchi; I don’t want this shameful thing to wreck my family.”