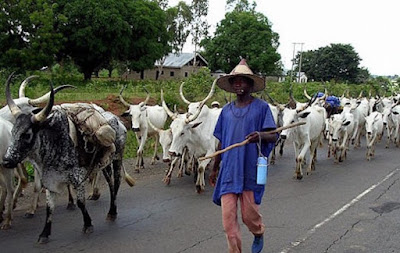 The police on Wednesday arraigned a 52-year-old herdsman, Abubakar at a Badagry Magistrates’ Court in Lagos State for allegedly stealing 15 cows valued at N800,000.

Abubakar, whose address was not provided, is facing a two-count of stealing and breach of the public peace, to which he pleaded not guilty.

The Prosecutor, Assistant Superintendent of Police Akpan Nkem told the court that the defendant committed the offences sometimes in 2016 at Ajara Avovipe area of Badagry.

Nkem said that the defendant stole 15 cows valued at N800,000, belonging to one Mr Yayi Adetunji, the complainant.


“Abubakar also conducted himself in a manner likely to cause a breach of the public peace by refusing to produce the cows on request by the complainant, ” he said.

The prosecutor said the offences contravened Sections 287 and 168 of the Criminal Law of Lagos State, 2015.

The Chief Magistrate, Mr Segun Aka-Bashorun, admitted the defendant to bail of N200, 000 with two sureties in like sum.

Aka-Bashorun adjourned the case until October 29, for mention.