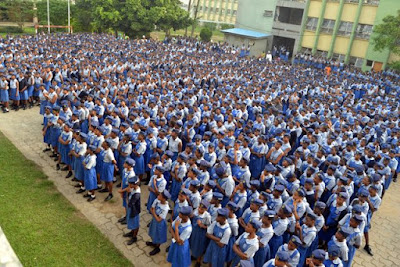 Lagos State Government says it has commenced an investigation into the purported outbreak of airborne, flu-like illness, among students of Queens College and other schools in the state.

It was gathered that another outbreak of a disease in Queens College,  the Commissioner for Health, Prof. Akin Abayomi, has said that an investigative team set up by the Ministry was dispatched, to unravel the cause of the illnesses.

While reviewing preliminary reports of the investigations conducted by the team, Abayomi said that the surveillance team identified what appeared to be a sporadic increase in upper respiratory tract infections, characterised by cough, catarrh, fever and weakness, across some schools.

According to him, the team has since visited Queens College and investigations are ongoing.

”Findings, according to the review of health records in the school sick bay, revealed that 89 students attended the clinic with influenza-like illnesses,” he said.

The commissioner said that a walk-through inspection to other facilities in the school revealed that environmental sanitation and water supply were optimal, but could be improved.

He also said that the incident was not an outbreak of any sort but an excessive number of reported cases, that needed to be investigated.

Abayomi said that nasal swab samples would be collected from pupils for confirmation of the cause of the illness.

”As we await a comprehensive report of the investigation being conducted, I would like to appeal to stakeholders of Queens College, other affected schools and residents of Lagos State to remain calm.

”All should ensure strict adherence to personal and environmental hygiene, at all times, ” he said.

The commissioner assured that the situation was under control and seems to be on the decline, as the government would give necessary updates, as the assessment and investigation progressed,” the commissioner said.

He advised all schools in Lagos to adopt basic precautionary measures against diseases and illnesses by teaching and ensuring good health practices.

”They must also commence and continue to raise awareness about respiratory etiquette, hold food handlers and vendors to the highest health and hygiene check protocols, as stipulated in the law, and  as practised world over,” he said.

Abayomi urged students to avoid sharing personal items such as spoons, handkerchiefs, toothbrushes, among others.

”School management must ensure the conspicuous display of posters with health messages around the school premises.

“They must commence daily announcements with reminders about preventing the spread of germs and need for frequent hand washing,” he said.

The commissioner advised parents not to send their children to school if they had features of an upper respiratory tract infection such as cold or flu-like symptoms, but rather had a doctor review them.

He appealed to school authorities as well as citizens to report suspected case(s) of any strange illnesses and diseases to the nearest Public Health Facility or the Medical Officer of Health (MOH) in their Local Government Area.

Meanwhile, in a statement, Ayomide Onakoya, QCOGA secretary, said findings showed that there is nothing related to “gastrointestinal symptoms” in the latest outbreak and that 85 students were sent home as a result of the situation.

“The QCOGA Medical Committee comprising a wide range of medical professionals have been in contact with the School authorities over allegations made,” the statement read.

“Based on their visit and discussions held, some students are affected by the flu with only 2 students in the sickbay as at Sept 30, 2019.

“Our findings have shown no relation to any other illness and thus has no correlation with any water-related epidemic.

“A review of the register provided by the external Medical Doctor who consults for the school showed that as at Sept 30, 2019: A total of 85 girls had been sent home since QC resumed on the September 14th, 15th and 21st.

“The first cases came in on September 24th and 25th. Of the 85 girls sent home, 24 have returned back to school.

“The symptoms observed and common to all the students taken to the sickbay include cough, runny nose and fever; some were low-grade, and some ran high; indications of upper respiratory tract infection. There were no gastrointestinal symptoms and nothing to suggest that the conditions are related to anything in the water or in the food.”