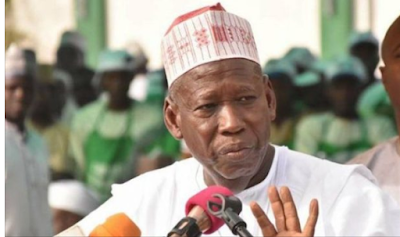 Earlier in the month, the police arrested some suspects in connection with the kidnap of some Kano-born children who were sold off in Onitsha, Anambra state.

On Thursday, Ganduje inaugurated a 16-man panel to probe the abduction and directed the ministry of justice to immediately amend the penal code on kidnapping to death penalty.

Ganduje said  kidnapping had taken a new dimension in the state and that only capital punishment could contain it.

He said the rescued children had been deprived of their culture, religion and parental care.

“These children will be rehabilitated. We must rehabilitate them. We must make them continue performing Islamic religion. They will grow in out religion and culture,” he said

Ganduje announced that the rescued children would enjoy the free and compulsory basic and secondary education introduced by his administration, adding that the government had also offered university scholarship to them.

He also donated N1 million each to the parents of the victims.

Parts of the terms of reference given to the commission include: “To conduct an inquiry into cases of missing persons in Kano State from the year 2010 to date and to procure all such evidence, written or oral, and to examine all such persons as witnesses as the commissioners may think it necessary or desirable to procure or examine.”

“To summon any person in Nigeria to attend any meeting of the commissioners to give evidence or produce any document or other thing in his possession and to require the evidence (whether written or oral) of any witness to be made on oath or declaration, such oath or declaration.

“To admit or exclude the public or any member of the public or press from any hearing of the commission, to prepare comprehensive data of missing persons in Kano State within the period and circumstances in which they disappeared.

“To find out both immediate and remote causes of​ cases of missing persons and to prepare and submit a written report including findings and recommendations to the Government of Kano State.”

During the occasion, Adeolu Adeyemo, chairman of Christian Association of Nigeria (CAN), who is a member of the commission, wept as he disassociated Christians and CAN from the dastardly act.

“As I sit here today, I see the gravity of sin committed by the perpetrators of this crime. I have seen the harm done to the parents because I am a parent,” he said.

“I was touched, very touched when we learnt about the rescue of these kidnapped children. It broke my heart and my heart is still broken. This is a crime against humanity which is condemned by God.

“In the Bible, it is not permitted to separate a child from the mother until the age of 13. This is evil punishable in the sight of God. Those people who committed this crime are not Christians, and do not represent the tenets of Christianity.

“Kano is a​ mini-Nigeria and we want to thank Governor Ganduje for making Kano a home for all. Nobody kidnaps for Christ. CAN condemn this act and Christians all over the world condemn it ”

Boniface Igwe, eze Ndigbo of Kano, described the issue as worrisome and condemnable.

“Whatever is bad is bad. This is not only a taboo, it is a criminal matter that must be tackled. The Igbo community in Kano has not experienced this kind of thing,” he said.

“Not only that the children were kidnapped but they changed their religion. We​ want to thank Kano people for their understanding.​ We condemn it and our leaders in the east condemn it too.”