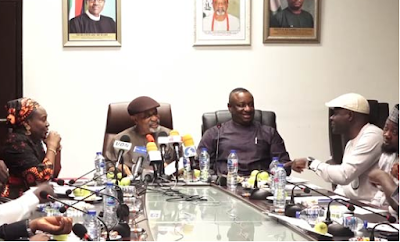 After days of intense negotiations, the federal government of Nigeria and the country’s labour unions have reached a deal on the implementation modality of the new minimum wage.

Disagreement over how the new minimum wage law signed by President Muhammadu Buhari in April would be implemented had lingered for months, with organised labour threatening to strike.

The Minister for Labour and Employment, Chris Ngige, disclosed news of the much-awaited agreement early Friday morning in Abuja shortly after a government team he led concluded a meeting with labour.

The meeting, which began at 8:24pm Thursday, ended 3am Friday.

The disagreement had centred around the consequential adjustments in salaries that must be implemented across board in line with the new minimum wage law.

NEW AGREEMENT
Speaking after the five-hour meeting, Mr Ngige said the consequential adjustment agreed upon are as follows:

He said the third category of the country’s wage structure which are military and paramilitary officers were also factored in in the agreement.

“Since they are not in the civil service , theirs will be communicated through the appropriate channels. Their percentages of increase is confidential,” he said.

MINIMUM WAGE
President Buhari signed the new minimum wage bill into law in April 2019. But its implementation has been stalled over salary adjustments disagreement between the labour unions and government representatives.

Specifically, the problem centred around the issue of relativity and consequential adjustments of salaries for various categories of workers.

On May 14, the federal government inaugurated the relativity and consequential adjustment committee, which set up a technical subcommittee to work out a template for the adjustment of salaries of public service employees in line with the minimum wage law.

BELOW IS THE FULL AGREEMENT REACHED BY BOTH PARTIES
MEMORANDUM OF TERMS OF SETTLEMENT REACHED AT THE END OF THE CONCILIATION MEETINGS ON CONSEQUENTIAL ADJUSTMENTS OF THE OTHER WAGES FOLLOWING THE NEW NATIONAL MINIMUM WAGE OF N30, 000 HELD AT THE INSTANCE OF THE HONOURABLE MINISTER OF LABOUR AND EMPLOYMENT (HML&E) BETWEEN THE FEDERAL GOVERNMENT OF NIGERIA AND ORGANISED LABOUR ON 9TH, 14TH, 15TH, 16TH ,17TH AND 18TH OCTOBER , 2019, AT THE CONFERENCE ROOM OF THE HONOURABLE MINISTER, FEDERAL MINISTRY OF LABOUR & EMPLOYMENT, ABUJA.

3. Following the threat by Organized Labour not to guarantee industrial peace after Wednesday, October 16, 2019, as a result of the deadlock in the ongoing negotiation on the Consequential Adjustment of emoluments in Federal Government Ministries, Departments and Agencies (MDAs) arising from the New National Minimum Wage of Thirty Thousand Naira (N30, 000.00) as imbued in the National Minimum Wage Act, 2019, the Honourable Minister of Labour and Employment in exercise of his powers under the Trade Dispute Act, CAP T8, Laws of the Federation of Nigeria (LFN) 2004, apprehended the trade dispute and called the parties to conciliation meetings. He met each of the JNPSNC separately on Wednesday, 9th October and Monday 15th October, 2019, Thereafter, joint meetings were held on 16th, 17th and 18th of October, 2019, after which the following Terms of Settlement and Agreement pertaining to the Minimum Wage Consequential Adjustments in the Public Service were reached:

GOVERNMENT SIDE
Dr, Folasade Yemi- Esan, Ag. Head of the Civil Service of the Federation