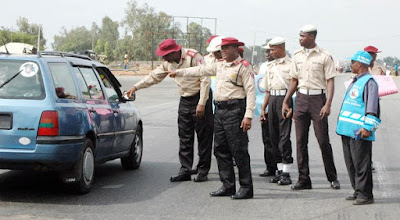 The Federal Road Safety Corps (FRSC) said about 1750 tricycle and motorcycle operators have been arrested as the clampdown on operators without class A license and number plates begins nationwide on Wednesday.

Giving the breakdown of the arrests, the Corps Public Education Officer said; ” The highest number of arrests was recorded in Kaduna State, with a total of 430 arrests. Nasarawa state followed suit with a total of 219 arrests comprising of 15 tricycles and 204 motorcycles.


According to him, this was achieved in friendly collaboration with the Nigeria Police Force, Nigeria Security and Civil Defense Corps and other law enforcement agencies.

It would be recalled that the Corps Marshal, Dr Boboye Oyeyemi , following the series of consultations with the JTB, agreed to shift the commencement of enforcement from the earlier date of 1 August, 2019 to allow for more sensitisation and awareness, and further consultations with critical stakeholders on the imperatives of the clampdown.

Speaking on the operation, the Corps Marshal said: “This shift of date was agreed upon to give riders adequate time to comply with the laws and acquire both the class A license and the number plates. We expected that by now, due to the adequate publicity we gave the commencement of enforcement and the consultations that followed, all affected riders would have complied to this demand of the law”

He continued; “The essence of this operation is to enhance the security of lives and properties of road users. There have been series of reports of pervasive use of these categories of vehicles to perpetrate all manners of crime and we are saying enough is enough. All Tricycles and motorcycles must have an identity so that they can be easily traced”.

Oyeyemi, therefore, called on all motorists who operate within these categories to endeavour to procure their licenses and also have their tricycles and motorcycles duly registered to avoid arrest.