9:08 AM CuteNaija 0 Nigerians in Diaspora 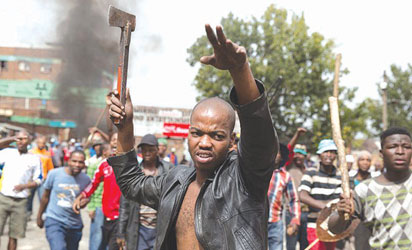 Three Nigerians are among other foreign nationals who on Tuesday suffered from fresh xenophobic attacks on foreigners in different locations of Witbank, Mpumanlaga Province, South Africa, the Nigerian community, has said.

The national spokesperson for the Nigeria Union, South Africa, Mr Odefa Ikele, told the News Agency of Nigeria on the telephone that the attacks started in the early hours of Tuesday.

Tuesday’s attacks are coming on the heels of efforts by Presidents Muhammadu Buhari and Cyril Ramaphosa to ensure they found amicable and lasting solution to xenophobia in South Africa.

“Groups made up of community members and taxi drivers went to different areas in Witbank attacking foreign-owned businesses and foreigners.

“Three Nigerians are injured, but no death case for now. Some of our nationals are seeking refuge at Witbank Police Station,’’ he said.

According to NUSA, the affected Nigerians are still taking refuge at the police station at Witbank.