9:52 AM CuteNaija 0 Latest News in Nigeria 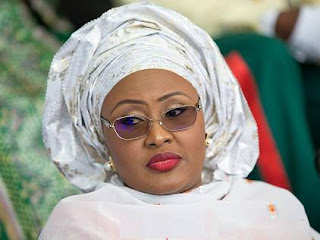 A fresh crisis on Monday erupted at President Muhammadu Buhari’s home as his wife, Aisha, battled the family of Mamman Daura, the President’s nephew.

Daura’s daughter, Fatima, in an interview with the BBC Hausa Service on Monday owned up to a video shot at the Presidential Villa.


In the video, the President’s wife, was heard asking questions and making comments about being locked out of a room and demanding that some people should pack their belongings and leave the apartment.

The First Lady and Fatima, in separate interviews with the BBC Hausa Service shed light on the video, which went viral on Friday.

Fatima in the interview said she shot the video with her phone “in case something happens.”

On her part, the President’s wife confirmed in a 25-second voice clip on the BBC Hausa Service website that she was the person in the video in question.

She accused Fatima of recording the incident while the security detail did nothing because the culprit was Mamman Daura’s daughter.

Mamman’s daughter was laughing at me – Aisha

The first lady said, “I was the one in the video, those behind me were the security personnel given to protect me, but Mamman Daura’s daughter, Fatima, shot the video in the presence of security officials and everybody. She was laughing at me because my husband said they should vacate the place for my son to occupy.

“I wanted to pass through that door to go into a store but they closed the door. I took an alternative route but the door was still locked.”

But in her own account, Fatima said she recorded the incident to provide proof for her parents and security officials in an event “something happens.”

She noted that she was surprised by the President’s wife’s outbursts during the incident.

Aisha Buhari said she was being oppressed – Daura’s daughter

In a 27-second audio clip also posted on the BBC Hausa Service website, Fatima said, “Her comments frightened me. She was hurling insults and shouting that she had never seen anything like it.

“I went back and took my (mobile) phone because if you went and said she acted the way she did, nobody would believe you (without evidence).

“She was making a lot of noise saying she was being oppressed. I filmed the encounter to show our parents and security officials for them to see in case something happens. From the way she was screaming, I even thought she would pick up something to hit us or something like that.”

In a written excerpt of the interview also pasted on the website, Fatima was quoted as giving a background to the crisis.

According to her, the face-off happened within a building within the Villa called the Glass House.

Adding that it was one out of several apartments within the villa, she said the President gave her father the building when he was elected as President in his first term.

After describing how close her father and the President are, she said, “Our father stayed there for three years until when the President’s son, Yusuf, had an accident and went to Germany for treatment.

“When he returned, the President told our father to move out of that apartment to go to another apartment called “House 8” also within the villa; that Yusuf was going to stay to continue with his treatment in the Glass House.”

The Glass House where Mamman Daura and his family were living is nearer to where Aisha Buhari lives.

She further explained that her parents were out of Nigeria when all these happened but her father gave instructions that she and her elder sister should go on a Saturday to move their belongings following the President’s instructions.

She further explained that they were putting their things together when all of a sudden, she heard noises from outside.

Fatima was quoted as saying, “I was in an inner room while my sister was in an outer one which is nearer to the main entrance to the apartment.”

She said the outer door was locked with a key which she said was the usual practice when they were indoors.

“When Aisha came and found the door was locked, ‘she used an iron chair to force the door open.”

This, she explained, was why she decided to record the incident so as to have proof of what transpired.

A Presidency source told one of our correspondents on condition of anonymity that the idea behind the investigation was to first ascertain if indeed she was the one who said all that had been attributed to her.

“What we can say at the moment is that the video is undergoing investigation to ascertain if indeed the lady in question was the one who spoke. That process is on,” the source said.

The source added that since Fatimah claimed in the video that she had more videos on the encounter to release, it was also better that the Presidency waited for the release of the remaining videos and then addressed them at once.

“The lady in question said she has more of such videos to release to the public. I think it is logical that we wait for her to release the remaining ones because the issues are taken at once,” he added.

Faulting Fatima, another Presidency source said, “The intent of the video was mischief. Why did she not show her own side. She did not show her part in the drama where the door was locked against the first lady to deny her access to some areas of the villa. She also did not acknowledge the abuse she first hurled at the First Lady.”

Mrs Buhari’s Special Adviser on Media, Mrs Bisi Olumide-Ajayi, did not respond to the calls made to her mobile telephone line on Monday night in an attempt by our correspondent to get the Presidency’s reaction.

The Director of Information to the First Lady, Suleiman Haruna, also did not respond to the calls made to his telephone line.

The clash between the President’s wife and Daura’s daughter generated reactions on Monday.

Groups, including the Coalition in Defence of Nigerian Democracy and Constitution, berated the Buhari administration saying the video was an indication of the power play in the Presidential Villa.

But as the groups condemned the President, there were indications that the Presidency had started investigating the video.

The Convener, Coalition in Defence of Nigerian Democracy and Constitution, Ariyo-Dare Atoye, called on the National Assembly to immediately probe Buhari for allocating a house to his nephew, where the latter had lived for over three years.

Atoye said this in a reaction to an interview by Daura’s daughter, Fatimah, who said Buhari gave Daura permission to live in the Glass House, Villa, for three years before moving him to a bigger apartment in the same Aso Rock.

The activist said worldwide, the Presidential Villa is meant for the first family, the Vice-President and his family as well as essential staff members of the President.

Speaking to newsmen he said, “It is unfortunate that President Buhari is abusing his office and using his power to advance selfish motives. Apart from the immediate family of the President and direct staff, the Villa is not meant to be used to house political friends, uncles or concubines.

“It is shameful that Mamman Daura, who is a de facto head in the Villa, allowed his daughter to grant an interview in which she accused the wife of the President. It is not only shameful but an affront.

“As a citizen and a group, we would advise the first lady to take legal action against those who have held her family hostage to advance selfish motives at the expense of the people. We call on the National Assembly to probe the abuse of the Villa.”