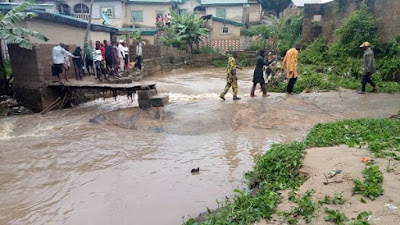 According to reports, the deceased simply called ‘Doyin’, an Indigene of Ekiti state, was away to an unknown destination by heavy flood from a canal very close to her residence in the town.

Her landlord, Elemukona Ademola, who narrowly escaped the raging flood, said: “I had to climb cocoa tree when many people thought I had been carried away by the flood.’’

The landlord said he had made many efforts to curtail the erosion from the canal before.


At the scene of the incident, the Ondo State Commissioner for Agriculture and indigene of the town, Otunba Gboyega Adefarati paid a sympathy visit.

He warned his kinsmen from building houses very close to canal.

Adefarati equally cautioned those who are in the habit of blocking the drainages with refuse to desist from such act as this practice always lead to flooding.

According to them, properties worth millions were destroyed in the community while roads, bridges and hotels with vehicles were badly damaged.

They appealed to their people to adhere strictly to town planning instruction and NEMA warning that those living very close to canals and rivers to quit during rainfall.

Already, the University Authorities have suspended lectures and tests earlier scheduled for Tuesday over the incident.

A statement signed by the Institution’s Acting Registrar,Opeolu Akinfemiwa however said all students should resume on Wednesday.

According to him: “The University is leaving no stone unturned in the quest to find the missing student.