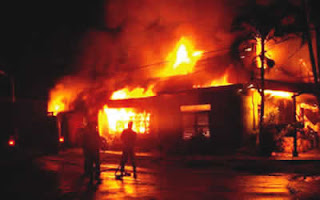 Helpless residents of the area, who watched with glee could not salvage the situation due to the intensity of the blaze.

It was learnt that security operatives were on ground to prevent hoodlums from catching-in on the fire to loot shops.


Sources blamed the blaze on power surge that occurred in one of the shops in the market when power was restored on Saturday night.

Also, in amateur video of the blaze posted on Facebook, some Nigerians could be seen shouting “Oh, Santana market is burning now, nobody can help.

However, Edo State government fire fighters did not show up during the inferno.

A middle-aged man simply identified as Mila said, he made efforts to reach the fire fighters via a mobile line to help put off the fire, which began at about 10pm on Saturday night, but there was no response.

Some shop owners, who stormed the market on Sunday morning following a distressed call, wept uncontrollably over the loss.

It would be recalled that a midnight fire had in August 2019 ravaged Uwelu mobile spare parts market in Benin.

Over two months after the sad incident, Edo State Government is yet to redeem its pledge to assist the traders, who suffered loss in the inferno.