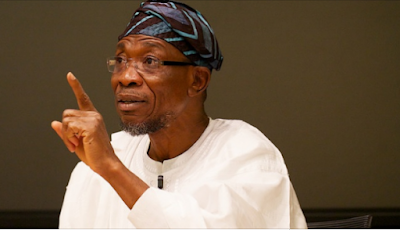 Rauf Aregbesola, minister of interior, has commended an undercover investigation which exposed the rot in the Nigerian prison establishment.

The journalist spent two weeks in detention — five days in a police cell and eight as an inmate in Ikoyi prison — tracking corruption in the system.

The minster commended his efforts and TheCable for a ”fantastic job undertaken by Soyombo and the organisation”.


“If you are thanking the EU and all those world bodies; it will be an exercise in grand deceit if we don’t recognise a fantastic job undertaken by Soyombo,” he said.

“We must recognise the fact that it is in line with the education programme that we are here celebrating …that undercover journalist which TheCable online newspaper brought out…. And I must equally commend that organisation and whoever it was that did undercover because I see it as part of the entire circle.”

While we await the outcome of the investigation to determine if what was reported was right or wrong, the intention of the publisher, undercover reporter and everyone involved in the reportage is worth celebrating says @raufaregbesola at the @CorrectionsNg HQ. pic.twitter.com/XiwZYJzDYC
— Ministry of Interior (@MinOfInteriorNG) October 31, 2019


Aregbesola also condemned the dehumanisation of inmates, saying maltreating them hinders their reformation as productive members of  society.

“You cannot permit dehumanisation of confined people and expect them to be anything less than an animal when they come out. The only way you can get a sane human being out of confinement is to… (educate), and that is what we use,” he said.