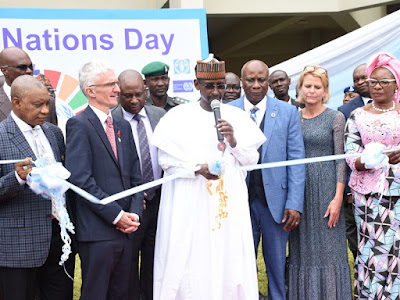 The Federal Government has officially handed over the rebuilt United Nations House to UN members and assured them of its commitment to ensuring the security and protection of their lives and property.

President Muhammadu Buhari made the commitment at the 74th UN day celebration and the official handover of the rebuilt UN House in Abuja on Thursday.

The celebration was themed, ‘The future we want, the UN we need.’

Represented by the FCT Minister, Malam Muhammad Bello, Buhari said that the Federal Government would ensure maximum protection of all UN institutions in the country.


According to him, the efforts of the UN in confronting global issues such as international conflicts through mediation and peacekeeping, global battle against climate change and environmental degradation have continued to yield positive results around the world.

Earlier, the UN Secretary-General, Antonio Guterres had said that the rebuilt UN House was a physical symbol of the close relationship between the UN and Nigeria.

Guterres, who was also represented by the Under-Secretary-General for Humanitarian Affairs and Emergency Relief Coordinator, Mr Mark Lowcock, said that the attack on the UN building in August 2011 that led to the loss of 23 UN staff was an attack on the values and aspirations that the global body sought to uphold.

“The opening of UN House today is an act of defiance in the face of terror.

“We stand together to say that we will not be cowed by violence.

“We will continue to support the Nigerian people to fulfill their dreams of a future of prosperity and security.

“On behalf of Antonio Guterres, the UN Secretary-General and the whole of the United Nations, I would like to pay tribute to the memory of the 23 UN colleagues, contractors, and visitors who lost their lives that day, and the many others who were injured.

“Their sacrifice will never be forgotten. My thoughts today are above all with the families and friends they left behind.

“Today, I want to dedicate this official handover of UN House to all those whose lives were irreversibly changed on that fateful day in 2011,” he said.

He added that the reopening of the UN building was a demonstration of UN collective commitment to addressing the complex challenges facing Nigeria, West Africa, and the whole world.