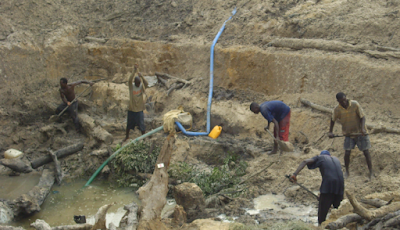 The Minister of State for Mines and Steel Development, Mr Uche Ogah, says the Federal Government remains resolute in it’s efforts to permanently check illegal mining in different parts of the country.

Ogah said this on Friday when he visited Gov. Okezie Ikpeazu at the Government House, Umuahia.

He said that the federal government had evolved strategies to harness the ingenuity of the artisan miners and encourage them to form cooperatives.

He also said that government was determined to implement policies that would ensure that issuance of mining permit “must be followed with active mining within the first six months of receiving the permit.”


He said that the essence of the policy was to ensure that only genuine and serious investors enjoyed the business opportunities in the industry.

He opined that the mining industry had the potential to boost the nation’s economy and that government was poised to address the challenges facing the industry.

The minister further promised government’s determination to control the erosion menace currently ravaging different parts of the state, including his Isuikwuato council area.

He expressed his willingness to collaborate with Ikpeazu’s administration to drive the success of his developmental agenda.

He said: “Politics is over, it is time now for governance. I will always project issues that will help to develop the state.

“We should all work as a team for us to develop programmes for the betterment of the people and development of the state.”

Responding, Ikpeazu congratulated  Ogah on his appointment and for deeming it fit to pay him the visit, adding that ”there is a lot to achieve for the state from the centre.”

He decried the level of illegal mining in the state and attributed it to the issuance of mining licence by the federal government without recourse to the state.

Ikpeazu, who expressed sadness over the devastating effect of erosion in the state, said that about 25 per cent of Abia land had been eaten up by the disaster.

He said that the intervention by the Nigeria Erosion and Watershed Management Project had helped to reclaim three critical erosion ravaged areas in the state.

He called on the federal government to urgently intervene to arrest the worsening erosion crisis in Isuikwuato.