Enugu Airport: We need $10bn from Buhari for reconstruction of runways -Minister 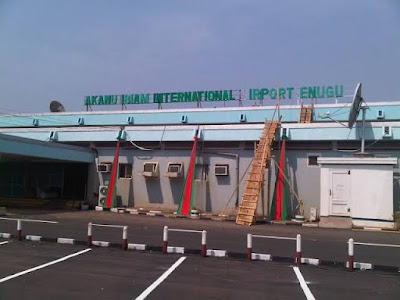 Minister of Aviation Sen. Hardi Sirika on Thursday said the Ministry of Aviation has made a special grant request of $10 billion to the President Muhammadu Buhari for the completion of reconstruction of the runways of Akanu Ibiam International Airport Enugu.

The Minister made the revealation at an interactive meeting with members of the House of Representatives Committee on Aviation and also said that there are some structural damages at the airport that required the reconstruction work.

He told the Committee that the Ministry had made a formal request for the approval of $10 billion dollars from President Muhammadu Buhari for the reconstruction work at the airport..

He further hinted that they had negotiated with the contractor and made payment of the initial bill of quantities for the contract sum and added that the presidential grant is required to complete the repairs.


He also said that there is an exim bank for the reconstruction of the airport and added that work would be completed before the end of December 2019.

Moreover the Permanent Secretary of the Ministry Mr. Hassan Musa has said that plans are at an advanced stage to confession the four international airports Port Harcourt, Abuja, Kano and Lagos.

He further informed that the Ministry is working at unveiling a Aviation Masterplan that would ensure total reformation and reconstruction of the nation’s airports.

He also said that plans are on the way for the establishment of an aerospace University and a national carrier.

On the challenges militating against safety and security of air passengers, he said that poor facilities, lack of manpower and high cost of Aviation fuel are the major challenges in the industry.

Chairman of the House Committee Hon. Nnolim Nnaji and other lawmakers told the Minister that the House is worried over non commencement of the rehabilitation work at the airport.