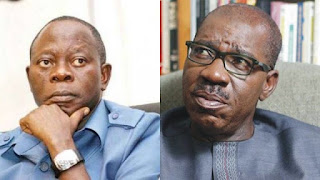 The Governor of Edo State, Godwin Obaseki, on Tuesday alleged that his immediate predecessor and the National Chairman of the All Progressives Congress, Adams Oshiomhole, had said he would make the state ungovernable.

Oshiomhole’s Benin home was reportedly attacked on Saturday, with the Chief Press Secretary to the ex-national labour leader, Simon Ebegbulem, claiming the attack was masterminded by Obaseki.


But speaking through his Special Adviser on Media, Communication and Public Affairs, Crusoe Osagie, Obaseki accused Oshiomhole of breaching protocol by not informing his office, the Commissioner of Police or the state Director of the Department of State Services of his visit to the state.

The governor said he had no knowledge of the alleged attack on the residence of the APC national chairman, stating that the report of the state Commissioner of Police, DanMallam Muhammed, had cleared the matter.

He said, “Oshiomhole has the intention of escalating the security situation in Edo State as he has said in the past that he was going to make the state ungovernable.

“The CP has declared the state peaceful but Oshiomhole and his cohorts are bent on making it ungovernable.

“Oshiomhole as a former governor should not undermine the capacity and integrity of the police.”

But Oshiomhole, who spoke through Ebegbulem, claimed it was Obaseki that wanted to create tension in the state and cause crisis.

He queried the neutrality of the CP in the matter for dispelling the attack on his residence.

He said, “Talking about security, it is actually the governor who is making every effort to plunge the state into crisis and bloodshed. Saturday’s siege to the residence of the national chairman by his thugs was a good example. Before that incident, state government sponsored thugs had been harassing and intimidating APC members across the 18 councils because the APC leaders refused to adopt his second term aspiration.

“We are even more scared now that the governor is making every effort to coerce the National Chairman into giving him details of his movement in Edo State. Who knows what he is plotting again.

“I don’t want to believe that the Edo State Police Commissioner, Dan Mallam Muhammed, is gratuitously lending himself as ‘a tool in the hands of’ some desperate and misguided politicians in Edo State whose pastime is to malign the reputation and public image of the national chairman.”