Duchess of Sussex, Meghan emotional as she admits she has not been OK behind the scenes 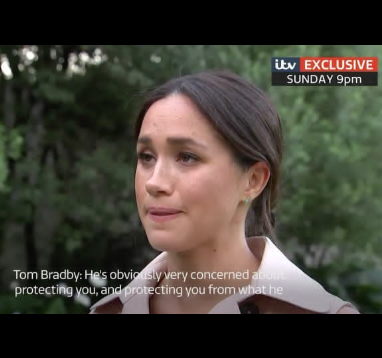 Meghan Markle has revealed that she has not been finding it easy with the intense media scrutiny and being a new mum and a newlywed.

The Duchess of Sussex revealed in a new ITV documentary that she has not really been OK behind the scenes and it's been a struggle to cope.

ITV's Tom Bradby followed Meghan Markle and Prince Harry on their recent 10-day tour of Africa and he got to speak with Meghan about how she has been coping through pregnancy and the early stages of motherhood amid the pressures of press interest in her public life as a member of the Royal Family.

Meghan looked emotional as Bradby asked her the question and she admitted that the glare of the intense spotlight and the incessant and often negative press coverage from some sections of the media had made things harder at a time when she was already "really vulnerable".


Bradby spoke to Meghan in a garden in Johannesburg, South Africa, about her experience before and after giving birth to Archie in May.

He raised concerns Harry had shared with him earlier in the trip that she could suffer in the face of the same media pressures he believes harmed his mother Diana.

He then asked Meghan what the impact had been "on your physical and mental health of all the pressure that you clearly feel under?"

"So that was made really challenging and then when you have a newborn … especially as a woman, it’s really, it’s a lot.

When Bradby asked how she was coping, Meghan said: "Thank you for asking because not many people have asked if I’m ok.

"But it’s a very real thing to be going through behind the scenes."

Bradby then added: "And the answer is, would it be fair to say, not really ok? That it’s really been a struggle?”

To which Meghan replied: "Yes."

Bradby travelled with the royal couple and their son Archie on the recent 10-day tour of Africa for an ITV documentary, Harry & Meghan: An African Journey, which airs on Sunday at 9pm on ITV.

The royal couple's tour of Africa, which ran from the end of September to early October, was notable for the unprecedented statement issued by Prince Harry in which he accused sections of the British tabloid press of pursuing a "ruthless campaign" against his wife.

The Duke of Sussex’s public statement was released on the couple's website on October 1 as it was announced Meghan was suing the Mail on Sunday after it published a private letter she wrote to her father. The paper denies wrongdoing and confirmed it would defend the case.

In his statement, Harry claimed some newspapers had "vilified (his wife) almost daily for the past nine months" and published "lie after lie" at Meghan’s expense because she was out of public view on maternity leave.

Below is a video of Meghan admitting that she hasn't been OK.


Meghan Markle gets emotional as she admits she has not been Ok behind the scenes. Video credit: ITV
A post shared by Lindaikejiblog (@lindaikejiblogofficial) on Oct 18, 2019 at 2:59pm PDT