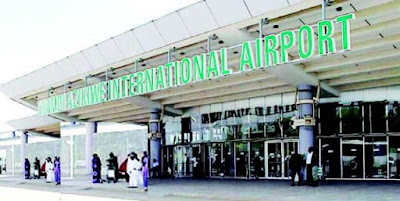 There was commotion on Thursday at the Aero Contractors’ stand at the Nnamdi Azikiwe International Airport, Abuja, as dissatisfied passengers of the airline protested cancellation of their flight.

It was gathered that the airline had suddenly cancelled their 1:20pm trip of flight 372 to the Osubi Airstrip, Warri in Delta State, announcing this just a few minutes before boarding time of a new flight for 6:30am on Friday.


The development infuriated the passengers, who had expected that they deserved better explanation from the officials of the airline at the airport. The angry passengers resorted to causing a scene at the airline’s stand, leading to a halt in its booking operations.

Some of the passengers, who spoke to newsmen while the commotion was ongoing, said their anger was about the unconcerned attitude of the officials of the airline. Others even threatened legal actions.

Miss Choice Egbo said that suffering technical hitches for an airliner was not new, but the lack of feeling for the stranded passengers by the officials of the company was what annoyed her.

“I don’t understand this Aero airline. You are rescheduling a cancelled flight and you are not notifying the passengers of the development. This is terrible because many of us who are here today don’t even stay in Abuja. For instance, I came from Maitama. I got to the airport with N6000 and I don’t have any other money on me. Now I am wondering how I will stay an extra night in Abuja, which I never planned for.

“They are now telling me that they have a bus that will take me to Area 1 and that I should find my way from there to any other part of Abuja. That is not nice, if they continue like this, they will lose money and customers. I am not satisfied and I don’t think I am going to fly Aero anymore,” she said.

Another passenger, who gave his name as Sadiq, said: “I have had this sort of experience many times, when flights will be cancelled, but in all I have always seen this arrogance in the airlines. They don’t care, they just announce flight cancellation like, ‘to hell with you, go and sort yourselves out’. One thing I have observed is if passengers are not violent, nobody listens to them.

“They will not attend to us until passengers had to block their ticketing. That was when the duty manager came. Why should things be happening this way? If you know you don’t have the capacity to carry passengers, tell them early enough, don’t go and open online portal and be collecting people’s money.”

Efforts to get officials of the company, who were on duty, to speak were unsuccessful.

Speaking on the phone, one of the online customer care representatives of the company, who gave his name as Emmanuel, explained that the flight had to be rescheduled to Friday because of a technical problem.

“I believe it was due to technical reasons,” Emmanuel said, adding that the flight had been rescheduled to 6:30am on Friday.

He said: “We apologise, it came on short notice.”