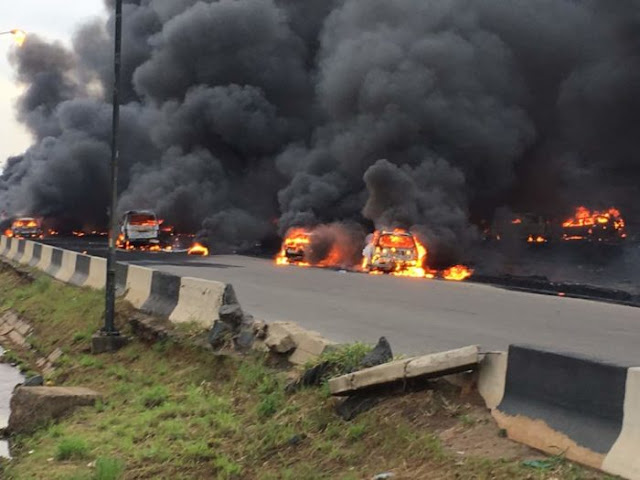 At least three more dead bodies were recovered, yesterday, at the Ochanja Market in Onitsha, which got burnt when a tanker filled with fuel caught fire at the Upper Iweka area of the commercial city.

This came as Governor Willie Obiano invited the affected traders to assemble at the Alex Ekwueme Square, Awka on Monday for documentation and possible assistance from the state government.

Two of the dead bodies were suspected to be salesgirls in one of the burnt shops, while the other male body was found in another shop close to the scene of the fire incident.

Yesterday, the traders constituted themselves into rescue groups and were packing the debris, only to discover the three dead bodies. Some of the traders almost threatened to cause riot when they were informed that Governor Obiano was coming to sympathize with them.

The governor, who visited the scene at about 9.20am for on the spot assessment of the disaster, could however not enter the burnt market. Commissioner for Information and Public Enlightenment, Mr. Don Adinuba, in a statement said Governor Obiano and the entire people of Anambra State regret the unfortunate situation, adding that the state government had taken steps to address the concerns of those affected.

He said: “ Government therefore requests owners of properties affected by the tragic accident, shop owners and family members of deceased victims to assemble at Ekwueme Square, Awka on Monday October 21 2019 at 11am for documentation and to see how the Anambra State government can assist them. “

A panel headed by the Deputy Governor, Dr. Nkem Okeke has been set up by the governor to immediately determine the cause of the accident, why the firemen could not put out the fire and how the condition of the victims can be ameliorated. “Governor Obiano and all citizens of Anambra State identify with victims of this unfortunate fire incident and the general inhabitants of Onitsha over this sad inferno. The Anambra State government will do it’s best to stand by those affected.

“Government therefore calls on all citizens to remain calm in the face of this disaster and be reassured of government’s commitment to the well- being of all and sundry.” He explained that security agencies in the state had been directed to ensure that law and order were maintained within and around the affected areas.

Former member of House of Representatives, Dr. Tony Nwoye said it was a sad day for Anambra State, regretting the enormous loss of lives and property. He added: “I empathise with the families of the dead victims and those who lost properties to the inferno. I urge them to show courage and utmost faith in the Creator. The sun will still shine on them all “This accident has become too recurring in Anambra and should worry everyone.

The collaboration of the government, relevant stakeholders and the citizens, is needed to develop a proactive strategy that will forestall any further occurrence of this nature. Never again shall we witness anything such as this. “This is a time for us to show faith in our state and rally around the victims of the carnage. I call on Anambra people to come to the aid of the victims and collectively give them support to rebuild their businesses and overcome their grief. It is indeed a troubling time and we must have to show that brotherly spirit and love that make us Ndi Anambra at this time.”

In his reaction, the Director General of Nigeria Inland Waterways Authority, NIWA, and a chieftain of All Progressives Congress, APC, Chief George Moghalu, called on the state government and other influential people in the state to come to the aid of the victims. He added: ”I am saddened at the loss of lives and we never wish for incidents like these in our dear state.

“I urge the Anambra State government to do what it is supposed to do to ensure that the traders continue to earn a living.” One of the victims, Mr. Chukwuka Okeke, a neighbour to the woman who died with her baby in the fire incident, described the tragedy as unfortunate but avoidable. According to him, it was not up to twenty minutes he chatted with the woman before she was consumed in the inferno.

In an emotion-laden voice, he said: “We were in our shops when I got the call that there was fire incident at Iweka. Though we saw smoke going up from a distance, nobody could believe it would extend to this place. “For over three hours, we were perceiving the smell of fuel mixed with gas from the tanker as it flowed through the drainage until the whole thing went up in flames. “The woman had already rushed out of the shop with her baby when she suddenly went back.

But she slipped and fell inside the gutter, which was already in flames.” Okeke said the woman whose husband also owns a shop in the city, had the baby early this year after 16 years of marriage. “She got married in 2003 but had her first baby early this year. It’s really a tragedy,” Okeke said. Efforts to speak with some landlords whose houses were burnt along Upper Iweka Road proved abortive as some, who were around were still in deep shock and their children could not speak for them. One of them, who managed to speak but did not give his name, said he is devastated and cannot able to quantify what he had lost.

He said: “I cannot even do any quantification of my losses and you know my tenants also lost greately in goods and house hold items. “Today is not the time to speak. We are still in great shock. This incident is not because we are careless, but something that happened in far away Upper Iweka and here we are counting loss on Iweka Road.”

Other affected traders in the incident along Menax, Iweka Road and Zik Avenue by Ochanja Market Roundabout also declined to speak with journalists saying they are still counting losses and will not be able to give account of what they have lost.

When our source visited the Ochanja Market and Zik Avenue, angry traders were seen salvaging, in pains and bitterness, some goods they felt could still be useful while others whose wares and shops were burnt completely, were bemoaning their losses and raining insults on all the relevant authorities that could not come to their rescue.

Speaking with newsmen, Chairman of Ochanja Central Market, Mr. Nelson Ojukwu confirmed that five shops inside Ochanja Market were burnt, adding that but for his traders and the leadership of the market who mobilised water tankers, the whole market and the surrounding buildings would have burnt to ashes. Ojukwu called on the Anambra State government to provide the markets with fire-fighting trucks to alleviate the sufferings and losses the traders and individual house owners incure during fire incidents.