7:44 AM CuteNaija 1 Latest News in Nigeria 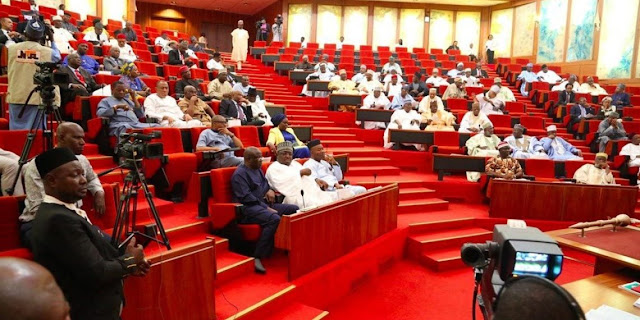 Crisis is allegedly brewing in the Senate over the employment slots allocated to the lawmakers by some federal agencies.

Some aggrieved senators have vowed to resist the sharing method allegedly adopted by the leadership of the Senate to allocate the slots.

Investigations revealed that the agencies gave the legislators the slots through their leaders.

But the slots were allegedly shared among the 10-member body of principal officers.

According to sources, many of the lawmakers are particularly bitter that their leaders allegedly shared the 100 slots allegedly given the Senate by the Federal Inland Revenue Service among themselves.

An aggrieved senator from the South-West, said on condition of anonymity, “We were given 100 slots by the FIRS but our leaders shared the slots among themselves.”

A ranking senator from the North-West said, “We have information that one of the leaders gave 26 slots to people in his senatorial district. There is a problem in the Senate already, because the leadership has cornered jobs meant for the entire Nigerians.

“Does it mean that you must know a senator before you get a job? Nothing is being done on merit. How will you get the best brains?

“The implication of this is that many people are being offered employment without undergoing any interview.

“They give them appointment letters because they know the leaders of the Senate. How can a single senatorial district get 26 slots when others have nothing?”

But a Senator from the South-East, who also spoke on condition of anonymity, revealed that he expected every legislator to have been given a slot.

A member of the Senate Committee on Federal Character, who also spoke on condition of anonymity, also confirmed that there was a crisis in the Senate following the development.

He said, “The fact that the leaders allegedly collected 100 slots and share them among themselves has shown that we cannot win the war against the lopsidedness that we talk about in this country.

“Some of our colleagues are already coming to lobby us to take it easy with the probe but we are going ahead with it.”

Speaking with journalists on Tuesday, the Chairman, Senate Committee on Federal Character, Danjuma La’ah, said he was aware that some agencies had been boasting that nothing would come out of the (secret recruitment) probe because they had allegedly reached out to the leaders of the Senate.

The committee is probing the allegations that some agencies had been secretly recruiting without advertising the jobs.

La’ah said, “We are hearing that some agencies will not honour our invitation because they have connection with the Senate leadership. I am not aware that any agency gave out employment slots to the Senate.

“The leadership has not told us that they received any slot.

“As the chairman of this committee, who is also representing Kaduna South, I am not in any way aware that we have been given any employment slots, so we are going ahead with our probe.

“I have taken it upon myself that I will probe deeply into the agencies’ claims and carry out an extensive investigation. We are going to expose all those that are tarnishing the image of the Federal Government.

“We are aware that some of the agencies are selling employment slots for as much as N1.5m when we have children who have not got jobs since they graduated.

“Some have become bandits and terrorists because the jobs meant for them have been cornered by some greedy people. Young educated Nigerians are joining Boko Haram because of a lack of jobs.”

On when the agencies would appear before the committee to defend themselves, La’ah said, “Never mind, they will appear soon.”

He added, “President Muhammadu Buhari is not happy with what is going and he has been looking for a way to sack people with bad records. I even want him to use this as a yardstick to sanitise the system.”

La’ah said on Friday the committee had asked the officials of the affected agencies to appear before them this week.

The committee last week started investigating the allegations of secret recruitment by some of the federal agencies.