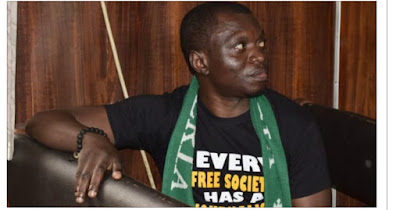 A federal high court in Calabar, Cross Rivers state, has denied the bail application of Agba Jalingo, a journalist critical of the administration of Ben Ayade, governor of Cross River.
On Friday, Simon Amobeda, the presiding judge, held that the charges against the journalist were grave with one carrying a capital punishment.
After 34 days in detention, Jalingo, publisher of CrossRiverWatch, was on September 25 arraigned on four count charges of treasonable felony, terrorism and attempt to topple the state government.
Amobeda said one of the grounds for which bail was applied for was health and there was no substantial evidence to prove that his health was failing.


The judge had earlier thrown out the preliminary objection of the prosecution counsel.
Attah Ochinke, counsel to the journalist, had on Wednesday, pleaded with the court to grant him bail on the grounds that he was determined to go through his trial, and, therefore, would not jump bail.
He also asked that the journalist should be admitted to bail on health ground.
Jalingo was arrested following a report he published on how Ayade allegedly approved and diverted N500m meant for Cross River state Microfinance bank.
In a letter the journalist wrote recently, he urged the people of the state to remain strong.
“One final assurance that I give to my people of Cross River, in particular, is that ‘we will overcome that dictator in Peregrino house’” he had written.