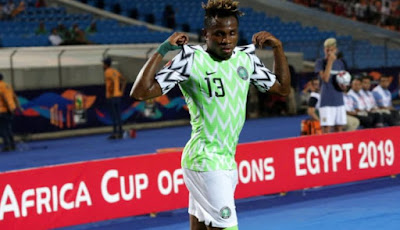 Nigeria international and Villarreal forward Samuel Chukwueze was named by France Football Monday night in a shortlist of 10 players contending for the second Kopa Trophy.

Chukweze, a winger plays for Villarreal FC in Spain.

The Kopa Trophy is an association football award presented to the best performing player under the age of 21.

The award is named after former French footballer Raymond Kopa and the winner is selected by former Ballon d’Or winners.

France Football explained why he was omitted in this year’s nominations, even though he is also contending for the Ballon D’or.

“This award, created last year, distinguishes the best player under 21 years of the year. Currently aged 20, the former Monegasque would correspond to the selection criteria. Only the rules state that players must not celebrate their twenty-first birthday in the year. But Mbappé will blow his twenty-first candle on December 20. In fact, he could not hope to be part of the list of nominees, which was therefore open to players born from January 1, 1999.

“On December 2, the jury of voters, composed of all the former winners of the Ballon d ‘ Or France Football, will have elected a new winner of the Kopa Trophy”.