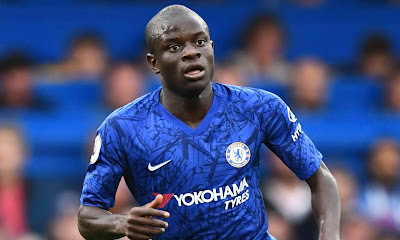 France’s World Cup-winning midfielder N’Golo Kante is due to return to training with Chelsea after almost a month on the sidelines, said Chelsea manager Frank Lampard.

The manager is counting on the 28-year-old’s return to ease the workload being shared by Jorginho and Mateo Kovacic, who both played the full 90 minutes in the 2-1 League Cup fourth-round defeat by Manchester United on Wednesday.

The defeat ended Chelsea’s seven-match winning streak and Lampard suggested that the setback was due to a shortage of midfield options.

“He (Kante) is hopefully going to join in training in the next two or three days,” said Lampard.

“Hopefully he will be back before the international break.


“I would have liked to have given Jorginho and Mateo Kovacic a rest because of the work they are putting in.

“I couldn’t because of N’Golo, Ross (Barkley), and Ruben (Loftus-Cheek) out long term.”

Should Kante’s groin injury not suffer a reverse he could be fit to play a role in Chelsea’s home match with Crystal Palace on November 10.