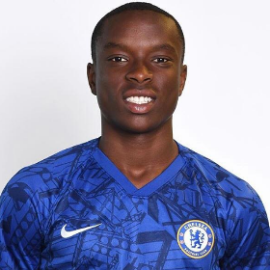 Chelsea right-back, Derrick Abu has decided to play for Nigeria.

The defender confirmed he has pledged his international future to Nigeria, according to Allnigeriasoccer.

He wanted to play for the Golden Eaglets at the ongoing 2019 FIFA Under 17 World Cup but failed to establish contact with the Nigeria Football Federation, NFF, and coach Manu Garba.

The 16-year-old is, however, eligible to represent England at international level.


Abu has been impressive for Chelsea U18 so far this season.

He was included in Chelsea’s squad that defeated Wolves 3-2 in the Under 18 Premier League Cup on Wednesday.