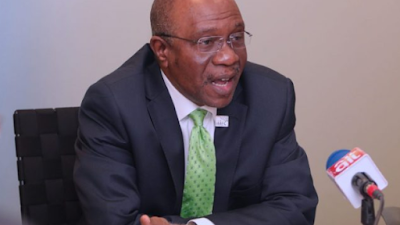 The Central Bank of Nigeria (CBN), has assured youths in the creative industry that they will benefit from a N22 billion intervention fund set aside to support the struggle to reposition the economy and diversify it.

CBN Governor, Godwin Emefiele, yesterday, at the Creative Nigeria Summit, said while the positive measures already put in place to achieve the purpose were indeed comforting, that there was still a lot of work to do.

He explained that the N22bn made available, under the Creative Industries and Financing Initiative (CIFI), would help the nation claw back lost opportunities and create employment in the entertainment industry, mostly dominated by the youths.

He said, “Our population of almost 200 million people is growing at close to 2.8 per cent annually, relative to our economy which grew at close to two per cent in 2018.


“Again, close to 60 per cent of our population are under the age of 35, indicating that we have a youthful population that will need to be engaged; and more importantly, our youth unemployment rate stands at close to 36 per cent.

“With sadness, many of our youths graduate from universities but with no industries to employ them. Rather than roam about, some of these youths are unleashing their creative talents in creating jobs, not only for themselves; but also for others through the music, movie, fashion and IT skills.

“CBN and Bankers Committee believe that the little we can do is to create opportunities for these youths to access credit and bank loans to grow their businesses.

“We cannot afford to let the talents of our youthful population go to waste, as it would portend great dangers for the progress of our nation. Efforts must therefore be made to harness the innovative and creative energy of our youths, towards enabling them to create productive ventures that will support improved wealth and job creation in Nigeria,” he said.

Meanwhile, the top banker said the Bankers Committee would this week; receive a 40-acre of land from the Lagos State Government to develop the first creative industry park in the country.

The move, which is described as the support of the Federal and Lagos State governments, would see the initial pilot of the scheme give a facelift to the National Theater, Iganmu, as the park is developed around the facility.

Emefiele also explained that “The tremendous facelift would be reopening the touring potential the National Theater offered during the FESTAC 77 Arts and Culture. Following the deployment of the pilot scheme in Lagos, we intend to set up similar parks in Kano, Port Harcourt or Enugu.

“Our goal through the establishment of these parks is to create an environment where startups and existing businesses can be incubated and rewarded for their creativity. “In each of these parks, efforts will be focused on discovering the most innovative young entrepreneurs across the music, movie, fashion and IT industries. Each park will be able to support skills acquisition for over 200,000 Nigerians.

“These individuals will be empowered with funds at single digit interest rate, state-of-the-art tools, high level training and networks, that will enable them to turn their ideas into a reality.

“When they are able to achieve this objective of creating a new music product, a high-quality movie, an IT software application, or a fashionable outfit, we will work to ensure that they are able to distribute their work on a large scale around the globe,” he said.

Emefiele noted that a growing creative industry would also support the growth of other sectors of the economy, like logistics, financial services, construction, as well as legal services companies.

Reiterating that CBN and the Bankers Committee intend to support this creative venture with N22 billion of initial funds, he added that part of the efforts in the music and movie industry will be to support young entrepreneurs in the development of digital content at the park.

“Our CIFI initiative will also enable the development of distribution outlets such as cinemas and music platforms, which will help improve the reach of the content developed by our young entrepreneurs.

“We intend to support the development of over 50 additional cinemas from our current capacity of 48 cinemas nationwide. The cost structure of these cinemas will be lean, in order to make movies affordable to a large section of Nigerians.

“These measures, which will be implemented over a five-year period, will increase the contribution of our movie industry to GDP, from one to three per cent.“

It will also result in improved revenue generation of over$300 million from production and distribution of Nigerian movies at cinema locations at home and abroad, as well as the creation of over 200,000 direct and indirect jobs,” he added.