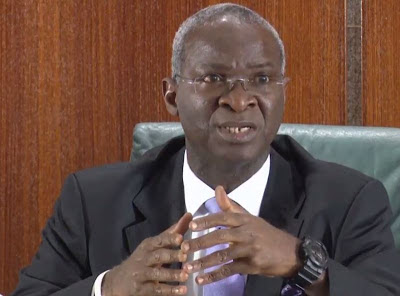 The Minister of Works and Housing, Babatunde Fashola on Thursday told the joint Senate/Reps Committee on Works that 459 roads projects across Nigeria should be prioritised rather than starting new ones.

The minister who revealed this while defending his ministry’s 2020 budget said:

We need to give priority to the existing roads numbering about 459 projects across the six geo-political zones of the country.

“As we are all aware we are operating under a difficult fiscal terrain and if you compare this budget of N10trn to that of 2014 which was N4trn you will see the difference because then a dollar was N160.


”But the trend has remained same and we are forced to make choices because of limited resources.

“There are some key roads scattered and linked to the six geo-political zones and vital to the socio-economic development of Nigeria that can be prioritised.

“By so doing we’ll not be leaving anybody behind and this is very possible if we can do it as these roads are linked to the airports, seaports, major agricultural farms and major fuel depots in the country.

The minister, however, expressed concern over the attitude of communities once a road contract is awarded in their domain.

“They even go to the site to start digging graves so that the compensation should be high, this has been a major challenge to us.

”At times they ask for insertion of their name in an old existing road and other demands that in most cases delay commencement of projects.

The minister also re-echoed his earlier call for a national infrastructure bond where money can be secured to maintain and construct new roads.

He said” an N10trn infrastructure bond could go a long way in helping us have a well-maintained road network.

In his response, the Senate Committee chairman, Adamu Aliero said the issue of road projects should gradually be shifted to the private sector.

He said” in countries like Egypt and Morrocco the issue of roads has been moved to the private sector and they are doing very well.

On the issue of compensation, the chairman said the state governments can always step in to resolve such crisis.