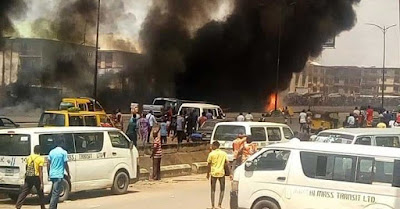 Many residents of Onitsha in Anambra state are “currently trapped” as a result of a fire outbreak in the commercial city.

A witness said a petrol-laden truck, which lost control, exploded after ramming into some buildings in the Upper Iweka axis of the city.

The incident sparked confusion among residents and traders at nearby Ochanga market.

“Many buildings are on fire and the firefighters are nowhere to be found,” a resident said.


In a video of the tragic incident, at least four houses were seen on fire.

The fire had not been put out as of the time of filing this report.

As at the time we filed this report, the Commissioner of Police, John Abang, has just arrived the scene for on- the- spot assessment.

The Fire Service department has been contacted and the number of casualties are yet to be ascertained.