BREAKING: 11 rescued at another ‘torture centre’ in Kaduna 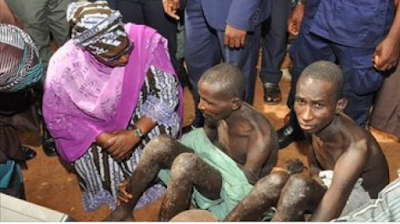 At least 11 inmates have been rescued at a religious centre in Zaria, Kaduna state.

Some of the rescued victims were found in chains. Baba had said some of the inmates were in chains for eight years.

She said it took the service of a welder to remove the fetters from their legs.

“They have been under torture. They were all in chains. We have to call a welder to remove the chains in their legs. Some of them have been in chains for eight years. They just removed the chains this afternoon,” she had said.

Three weeks ago, the police raided a religious centre at Rigasa, in Kaduna, rescuing at least 300 persons.

Tony Ojukwu, executive secretary of National Human Rights Commission, has directed state coordinators of the agency in the north-west to investigate activities of illegal detention centres.