4:08 AM CuteNaija 0 Latest News in Nigeria 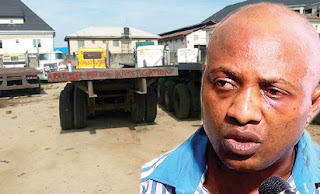 Suspected kidnap kingpin, Chukwudimeme Onwuamadike, alias Evans, has approached the Lagos State Government for a plea bargain in his trial over the attempted kidnap of the Chairman of the Young Shall Grow Motors, Vincent Obianodo.

Evans disclosed this through his counsel, R.B.C. Eke, on Friday before a Lagos State Special Offences Court in Ikeja.


Evans is standing trial alongside his co-defendants, Joseph Ikenna Emeka, 29; Chiemeka Arinze, 39; and Udeme Frank Ubong, 43 on counts of murder, attempted murder, conspiracy to kidnap and selling of firearms, among others.

According to the prosecution, the defendants committed the offences on August 27, 2013, at Third Avenue in Festac Town, Lagos.

Evans and his accomplices were alleged to have killed one Ngozi Chijioke and attempted to kidnap and kill Obianodo.

However, the proceedings in Evans’ two trials were stalled due to the absence of the investigating police officer.

Reacting to the development, the presiding judge, Justice Oluwatoyin Taiwo, said, “Your witnesses have not been coming to court. This witness is the IPO and he hasn’t finished his testimony.

Justice Taiwo adjourned both cases till December 9 for continuation of trial.