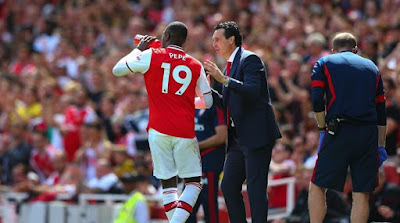 Unai Emery has heaped praises on Nicolas Pepe after his match-winning free-kicks for Arsenal in the Europa League against Vitoria at the Emirates Stadium on Thursday.

The Gunners trailed 2-1 when Emery brought Pepe off the bench at the Emirates stadium in the UEFA Europa League.

The Ivorian winger came on as a 74th-minute substitute for Alexandre Lacazette.

He sparked a lacklustre Arsenal into life with two sensational free-kicks in the 80th and 92nd minutes to snatch a 3-2 win.


The goals were an insight into why Arsenal paid a club-record £72 million to sign the forward from Lille in the summer; the Ivorian had struggled prior to Thursday’s heroics.

It was a performance that drew the plaudits from Emery, who revealed that Pepe had been practising his free-kick routine on the training field.

“Every new player usually needs time for adaptation,” he said in his post-match press conference. “Pepe is a very good player and we believe in him totally, “he told reporters after the game.

“We are very happy for him and us because he has two goals from two set-pieces which were perfect.

“He has been trying since last week with set-piece shooting on the training ground and I was watching his shooting.

“He is improving and tonight he has two goals, which are important for us and for him. He’s continuing the adaptation in his process and as soon as he can adapt, that’s better for us.

“The most important thing is the three points and that some individual players can improve, that they can take confidence for us and for them,” he said.