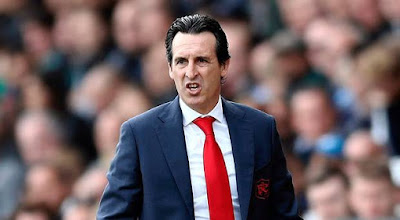 Arsenal fans would be forgiven for having flashbacks as the Gunners needed two late Nicolas Pepe free-kicks to see off Vitoria Guimaraes in the Europa League on Thursday.

Empty seats at the Emirates, grumbles from those who were there and calls for the manager to go, it was very reminiscent of the final years of Arsene Wenger’s tenure before the Frenchman finally stepped aside in 2018.

Unai Emery was the man chosen to succeed Wenger as the first new Arsenal manager since 1996, but the club could be looking at another appointment soon with the Spaniard showing little sign of having improved the club’s fortunes over the past 17 months.

Emery’s first season ended in disappointment. Arsenal blew two chances for a return to the Champions League, winning just one of their last five games to finish fifth in the Premier League and then losing the Europa League final 4-1 to Chelsea.


Often derided by fans for a lack of investment, the club’s American owner Stan Kroenke backed Emery with a surprising splurge in the summer transfer market.

Pepe was signed for a club-record £72 million ($88 million) fee from Lille, Kieran Tierney and David Luiz brought in to improve a faulty defence and Spanish international midfielder Dani Ceballos loaned from Real Madrid.

Yet, a 1-0 defeat at newly-promoted Sheffield United on Monday had all the bad hallmarks of Wenger’s final days as Arsenal were blunt in attack despite dominating possession and undone at a set-piece for Lys Mousset’s winner.

Defeat saw Emery’s men drop out of the top four and while they are just two points adrift of Chelsea and Leicester in fifth, the feeling is Arsenal are going backwards.

Between August and December last year, the Gunners went on a 22-match unbeaten run as the change of manager reinvigorated a club that had gone stale as standards slipped in Wenger’s second decade in charge.

However, now Emery’s record in his first 47 Premier League games is worse than Wenger’s final 47.

Emery has consistently struggled to find the right balance between defence and attack.

Earlier this season he was criticised for leaving his defence too exposed by cramming in as many of his attacking talents as possible in 2-2 draws against Tottenham and Watford.

A few weeks on and he had to field questions this week over a lack of creativity as a strike force including Pepe, Pierre-Emerick Aubameyang and Alexandre Lacazette lacked service in Sheffield on Monday night.

One man who does not appear in Emery’s plans as a solution to link defence and attack is Mesut Ozil.

The German playmaker is the highest earner at the club, but has featured in just two of 13 games so far this season.

Ozil has often flattered to deceive during his six years at the Emirates, but he remains popular among the fanbase with one banner on Thursday night telling Emery “to stop freezing Ozil out.”

There seems little prospect of Ozil returning for Sunday’s clash with Crystal Palace, but if he continues to ignore his mercurial talent, Emery needs to find other solutions and quickly is his stay is not to be a short one.