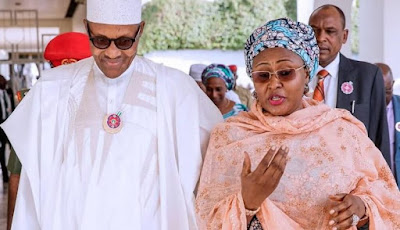 First Lady Aisha Buhari on Sunday said it was not her duty to confirm or deny the rumour that her husband President Muhammadu Buhari wanted a second wife.

She told BBC Hausa that the responsibility to confirm or deny the rumour was that of those involved in the matter.

She said: “He (Buhari) is the person rumoured to be planning a marriage, not Aisha Buhari. They (those concerned) are supposed to come out and clear the air.”

The first lady denied a rumour that she left her husband because she did not agree with his plan take a second wife.

She called for urgent action against the menace of fake news.


The social media was abuzz last Thursday with news that President Buhari was to get married to the Minister of Humanitarian Affairs, Disaster Management and Social Development, Sadiya Umar Farouq.

Farouq, meanwhile, was in New York for a United Nations (UN) Campaign Against Poverty event.

Last Friday’s raka’at prayer at the Aso Rock Mosque witnessed a seemingly unprecedented number of curious worshippers who wanted to confirm the viral story about a marriage that never happened.

Mrs Buhari, who addressed journalists shortly after arriving in Nigeria from the United Kingdom, said she visited her children and attended to her health while away.

She said: “It has been a tradition for us. For like 20 to 27 years now, if our children are on holiday, we spend it with them.

“I never abandon my children and last year, I went to Spain and spent two months with Zahra when she gave birth.

“While on holiday in the U.K, I fell sick; so, I stayed back to see a doctor who advised me to stay back to attend to my health.

“From the U.K, I travelled to Saudi Arabia for Hajj and returned to England on doctor’s advice. They also advised that I should slow down my activities.”

She recalled that due to fake news, she received calls from people who sought to confirm whether her husband was dead when he was sick.

She said: “The genesis of this fake news started when my husband fell sick and perpetrators of this act were showing fake ambulance, hospital and dead body, suggesting that my husband was dead.

“That time, I received so many calls from other first ladies and presidents of other countries to confirm; so I called the attention of Nigerian Communication Commission (NCC), National Broadcasting Commission (NBC) and the National Orientation Agency.

“Fake news will lead this country to something else if actions are not taken with immediate effect.”