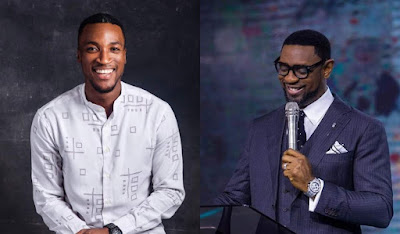 The actor and YouTuber tweeted the reason he decided to speak out against Fatoyinbo months after leaving the church, saying:

So apart from raping pregnant women, married women, There is the case of forcing a lady to abort which led to her death. I didn’t know of this story till I left COZA. A family friend of the victim reached out to me in the DMs. This was the one took me out. It was all too much.

Some of my female friends opened up to me about him trying to get them to hotel rooms and how they curved.. some he made advances to from seeing them at airports or something.. The said they couldn’t tell me cos they knew how much I loved him. Sigh.

Me wey I don hear say the libido no normal. Na jazz dey make the man do am. And the wife know. Dem dey service sontin. Me I nor know oh! 😒

It’s so sad. The Nigeria we are in today, criminals rule over the just. The judicial system is intensely corrupt.

For those people saying “court of public opinion is useless” and that “the case should be handled legally” well. OJ Simpson did it. But the court let him go. Everyone knew that he did it. But the court system can be rigged. And rape cases are the hardest to prove. How do you prove rape? Especially one that happened years back or even a few months back? How!

The court needs proof. But with testimony, the public will smell fire. Yup. There are still so many stories, so many more in the shadows. Women that don’t want to revisit that history, yes there are a lot of consensual sex, and it’s going on with a lot of them in the church now, but this rape… Is deep. So many don’t want to come out publicly. Cos hate.

Some of the ‘big pastors’ that have covered him in the past are the ones who have money scandal Locally and internationally. Isn’t it shameful? A pastor, on the run? Because of tax evasion and devious money practices. Pastors that traded their calling for money. Some of them can’t go to the UK!! Your pastors oh. Smh.

Once he notices the weaknesses of these men of God, who I do not doubt may have true callings, he will bamboozle them with ‘Prophet seed’ and honour seed. They will see envelope and car gift. They will fall in love with him. So that’s how he has penetrated christiandom. Some powerful fathers and mothers of faith have shielded him and covered him. But there is a MOG who he did everything to get to, and that Bishop blocked him. I’m withholding name.  Let me even say another story.

So I will never forget the 12DG that Creflo Dollar came to COZA and preached that after so many years in ministry, he had just discovered that tithing wasn’t a must. It should be done out of love and not necessity. That day, there was confusion in church 😂 Ah! After Creflo left.

He mounted the stage and said “even if God says don’t tithe, I will tell God He doesn’t know what He is talking about. I will tithe like my life depends on it!! Because we know what works for us!!”

Something of the sort.. I was like.. 😒 sketch much.

See, that church has weaponised loyalty. Those members can’t move. Some is money (pastor supports their business or owns it sef), some it’s religious strongholds, some is pastoral ‘love’, and then some are just being plain old Nigerians 😂 (ignorant animals).

What of the time he told church members to defend their pastor on social media?

He said if someone attacks your pastor online, how do you let that happen? You should protect your prophet! The church went wild. Screams! Meanwhile, I was like is it only me that sees this is wrong?

Encouraging bad behaviour and trolling online? Instead of teaching your members on how love should act? I remember Ese Walters scandal. I left the church and it was more about the church’s attitude and culture of trolling, treating her like she was the devil. I excused myself.

I have no problems with a man falling, making a mistake. But I expected that robust report. I expected him to talk to us and say… I fell. I would never have left if he said it openly. I expected the church to hold him accountable. If he can’t be accountable he will do again.

But I saw only cover up. My dears, I left. But God told me to go back. Several months I fought with it cos… I can’t swallow being taken for granted. Not from anyone. And certainly not from my pastor like this. He’s setting a wrong precedent I argued. He has no regard for us.

So I did. I struggled. Those months were tough. My friends left. I was the only one who remained. Kai… I didn’t have explanation. I remember, anytime he would be scheduled to come to Lagos, I wouldn’t go to church. So later, I started trying. I intentionally started loving him cos I’m like…if God said stay here, and he’s the pastor, then God has placed him over me. I have to accept. Mehn… When this Busola thing happened, God said “this is why I kept you here. Now speak out”.

I was in pain for 3 days. My back. I couldn’t sleep for more than 3 hours for those tumultuous 3 days. The second I put up the last post, the pain left my back. The heavy weight. And I said to my wife “I will sleep tonight”.

One time, one of his spiritual mentors, the one that was in the news for asking for 1 thousand dollar seed everywhere for everything. She came to church and she said God told her to tell us that if anyone opens their mouth to gossip about pastor or the church, they will suffer. Now that I put 2+2 together, could it be that this woman was doing crisis control? Me I wasn’t hearing anything oh. Cos I generally didn’t flow with COZA church folk.

My life was ‘in for service, out the next second’. So… Maybe cos of things like this, dem dey fear. Chai!! Sigh