You can accuse Osinbajo of anything but not corruption 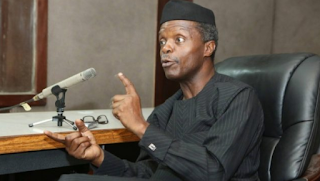 You can accuse Vice-President Yemi Osinbajo of being ‘’down-to-earth’’, considering his pint-size. You can also accuse him of intellectual exuberance, but you cannot tack corruption to him. It will not stick.

Over the years, the maelstrom of anger against Osinbajo has widened. The reason for this, perhaps, is the perception by some Nigerians that he is not standing up enough for his own – the Christian fold and the south — when it matters. Another reason is the amplification of this perception by some members of the opposition who deploy propaganda to ‘’divisive finale’’.

Osinbajo’s faith and calling – as a pastor – are sometimes juxtaposed with allegations of intellectual dishonesty, pretense and of enshrouding the wrongs in the Buhari administration.


As matter of fact, the vice-president often appears to be singled out for remonstrance for the lapses and controversial policies of the administration.

For example, in June, the vice-president was reported to have told Nigerians in New York that Nigeria had about 112.7million people living in extreme poverty as of 2010 – this was in response to reports of the country becoming the world poverty capital under Buhari.

One of those who drew blood from Osinbajo on account of this was Reno Omokri. The soi-disant “Buhari tormentor’’ vocalised the typical perception. He said the vice-president lies as much as the devil.

He said: “You see that no matter how far and fast Osinbajo’s regular falsehood travels, it will always be overtaken by truth.’’

“I will like to say again that Mr Osinbajo has shown himself to be a man of very base character, who lies as much as the devil that he preaches against and whose behaviour has undermined the faith of genuine believers.”

Really, social media has made it facile to sculpt perceptions. All it takes is for a stentorian voice, with a strong capacity for babble, to make pronouncements on an issue or an individual, and the mob, which operates without the ‘’encephalon’’, go to town and bleat.

It is understandable that there are high expectations of Osinbajo being a man of the robe. But the tendency to diminish him for standing in support of the administration he serves is an act of sanctimony.

I think, by being a strong support to Buhari, Osinbajo is giving to Caesar what belongs to Caesar.

Also, before the Ruga programme was pigeonholed, Osinbajo took much of the obloquy for the controversial initiative, even though he had nothing to do with it; he was already working on the National Livestock Transformation Plan with the governors of the 36 states.

The vice-president, eventually, had to issue a statement dissociating himself from Ruga to get the hounds off.

In addition, there is the perception that he is not doing enough or not exerting enough pressure on the administration to secure the release of Leah Sharibu, a Christian girl in Boko Haram captivity.

In fact, this was the core of one of Omokri’s jabs at Osinbajo. As I said, it is understandable, considering Osinbajo’s religious background. But perceptions are not always true.

However, these accusations can be palliated because they are governed by perceptions. But the allegations of financial impropriety and fraud against Osinbajo by some persons border on his personal integrity. They are weighty and damaging.

It is characteristic of our brand of politics, for political actors to casually tag other actors as corrupt even when there is no evidence. Nigeria’s politics is where good and competent men and women get into, and become sectioned as part of the vacuous, predatory corrupt class.

The reason most Nigerians with the aptitude for leadership do not go into politics is for fear of the ‘’tag’’.

Even the principled Oby Ezekwesili was not spared of scandals after bravely stepping into the molten magna that is Nigeria’s politics. Allegations of diverting N153 million campaign funds rippled when she decided to back out of the 2019 presidential contest.

One thing is certain; the hawks are hovering over Osinbajo in Aso Rock. He himself admitted that there are saboteurs working against the government. These recent allegations may be a furtherance of the artifice of those hawks.