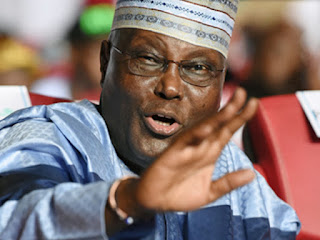 Former Vice President, Atiku Abubakar, on Tuesday said xenophobic attacks on Nigerians in South Africa was a blot on common history of both countries.

Atiku, in a statement he issued in Abuja, described the attack as the most disturbing development at the turn of the century.


According to him, Nigerians who live in the Republic of South Africa have consistently been victims of xenophobic, violent attacks.

The presidential candidate of the Peoples Democratic Party in the 2019 elections said it was unfortunate that both Nigeria and South Africa had not done enough to reduce the spate of those attacks.

“Both Nigeria and South Africa share a history of brotherhood and camaraderie at different times in our difficult times and it is very important that we do not allow this ugly development to cause a blot in our shared history.

“While I recommend that both countries press all available diplomatic buttons as fast as possible, it is important to impress on citizens from both sides to see ourselves as brothers and never as adversaries.

“True, the days of apartheid in South Africa and military rule in Nigeria are far behind us, we still both have a common enemy and that is in expanding the space for economic prosperity to a large range of our peoples.

“The new battle is economic in nature and it will be delusional for both Nigeria and South Africa to think that it is a battle we can win in isolation of each other.

“Neither and never can victory in the economic battle come by the way of turning daggers at each other,” he warned.

Atiku called on Nigerian mission in South Africa to open its doors wide for all humanitarian support that could be required of them from Nigerian victims of these attacks.

“Also, it will be a good take-off ground for solution to this problem for the South African government to cause a probe into the attacks and bring all perpetrators to book,” he said.