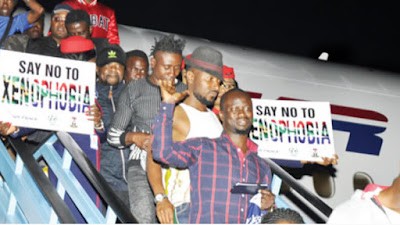 More facts have emerged on the bottlenecks which nearly frustrated the evacuation of 313 Nigerians from South Africa by the Air Peace Boeing 777 aircraft on Wednesday.

The flight which was scheduled for 9 am did not depart the OR Tambo International Airport until 4 pm, following various obstacles reportedly imposed by the South African airport and immigration officials.

The plane eventually arrived in Nigeria with 178 persons at the Murtala Muhammed International Airport, Ikeja, Lagos at 9.34 pm.

Investigation revealed that Pretoria was not happy over the evacuation operation which senior Foreign Affairs Ministry officials described as “a yellow card to Nigeria-South Africa relations.”


This, it was gathered, was seen by SA authorities as a thumbs down, hence the decision to mount impediments to frustrate the evacuation exercise.

Our correspondent gathered on Friday that 84 Nigerians had boarded the aircraft at the Johannesburg airport when the SA immigration officials announced that they must carry out a biometric capture of all returning individuals.

It was learnt that all the people on board were deplaned for the biometric exercise with the immigration officials spending about 10 minutes to capture each person.

Officials who participated in the clearance process at the airport explained that the immigration service cancelled valid South African visas possessed by Nigerians during the biometric exercise.

It was learnt that the biometrics was a smokescreen to blacklist Nigerians leaving the country over xenophobic attacks which Pretoria has strenuously denied.

An official said, “When you are evacuating your citizens from a country, it is like sending a strong message to that country about your relations with them. No country would be happy with the evacuation of foreign nationals from its territory.

“South Africans were very strategic. We arrived at Joburg by 6.15 am. The intention was to leave by 9 am, but after clearing about 85 out of the 313 who were scheduled for airlifting, they insisted they should do biometric capture for those who were willing to leave.

“So, they had to come down from the plane and start the clearance process afresh. Now, there are reports that if they capture your biometrics and you leave, you won’t be allowed into South Africa again or you may be barred from visiting for at least 10 years.

“So, some Nigerians who planned to come to Nigeria to relax for some time and then go back eventually decided to stay back for fear of being barred from visiting South Africa, where they have investments and families.”

It was further gathered that some women who wished to leave with their children were asked to present letters of consent from their husbands.

Many of them who could not provide the letters were also said to have gone back home after spending several hours at the airport.

A ministry official said those who had elected to stay back following the new conditions imposed by the SA immigration were about 135.

He stated, “The immigration asked those who were travelling with children to present letters of consent from their spouses. If they didn’t have the consent letter, they would not allow the children to leave with the mother.

“Initially, it was 313 persons who were billed to come back with the flight, but 135 went back. They included those who were travelling with children without letters of consent and those who did not want to do the biometrics so that they wouldn’t be barred from returning to South Africa again.”

Our correspondent was also informed that the representative of Geoffrey Onyema, the Minister of Foreign Affairs, was barred from accessing the cargo wing of the OR Tambo International Airport by security officials.

When asked if the SA officials informed their Nigerian counterparts about the rationale for the biometrics of the returnees, another official said, “There was no formal announcement to this effect, but there were reports that anyone who left may be barred from visiting South Africa for life or for at least 10 years.

“The credibility of the report was strengthened when the immigration officials were cancelling valid visas, as they were clearing those with valid travel documents.

“Even if you have one or two years visa, it was cancelled, and this means you have to apply afresh and it may be difficult for you to get the visa again. Nigerian officials were frustrated. The Minister of Foreign Affairs sent an official to represent him at the airport, but the person was not allowed access to the cargo wing for a long time.”

Findings also showed that the Nigerian Consulate contributed to the rowdy situation at the airport as they did not give the emergency travel documents to those with expired passports until they got to the airport.

The MFA officials explained that the Mission had been advised to distribute the travel certificates to the next batch of returnees who needed them at the consulate ahead of time to ease the departure process at the airport.

The next batch was expected to be airlifted on Saturday or Sunday from Joburg to the Murtala Muhammed International Airport, Lagos.

Giving an update on the operation, the Chairman, Nigerians in the Diaspora Commission, Abike Dabiri- Erewa, said the Consul-General of Nigerian Mission in Johannesburg was already addressing the issues with the SA government.

Dabiri-Erewa added, “Because of the serious hurdles put in place by the SA authorities on this first evacuation, we will have to wait for an update from the consulate as they resolve some issues with the SA authorities. The next flight maybe Saturday or Sunday.

“However, Chairman Air Peace, says the airline is on standby and ready for more evacuations anytime.”

The returnees would also get a soft loan from the Bank of Industry to support those interested in trade.

When contacted last night about the ordeal faced by Nigerians at the airport, the acting SA High Commissioner to Nigeria, Amb. Bobby Moroe, simply said, “I am currently in Abuja and not privy to what transpired in South Africa during the transfer of Nigerian nationals from South Africa to Nigeria.

“You may wish to contact the Nigerian High Commission in Pretoria through the Ministry of Foreign Affairs to ascertain the facts around this matter.”

The MFA spokesman, Ferdinand Nwonye, could not be reached for comment on what the FG would do about the reported travel ban imposed on Nigerians by SA, as he was said to be outside the country.

A text message sent to the minister, Onyeama,  on the issue had yet to elicit a response as of the time of filing this report.