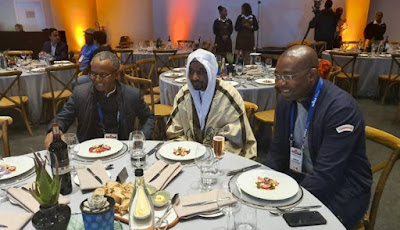 This was disclosed by Senior Special Assistant (Electronic Media) to the Governor of Ekiti State, Kanmi Olatoye.

Following Nigeria’s withdrawal from the WEF over xenophobic attacks on Nigerians and other foreign nationals, the Ekiti State Governor, and his Kaduna State counterpart, Nasir El-Rufai and Emir of Kano, Muhammadu Sanusi II were sighted in South Africa.

The presence of the trio, including the presence of Bring Back Our Girls campaign leader, Oby Ezekwesili, has sparked reactions from Nigerians, who condemned their presence in South Africa in the light of the xenophobic attacks.


“Contrary to some misleading online reports, Ekiti State Governor, Dr Kayode Fayemi was not at the World Economic Forum in South Africa.

“Rather, the Governor is in South Africa to honour an invitation by a long time friend and one of Nigeria’s most celebrated journalists, Mr Dele Olojode at the “Africa in the World Festival of Ideas” which held in Stellensbosch far away from Cape Town.

“More importantly, the event already held before the decision of the Federal Government to boycott the WEF programme,” the Ekiti State Governor aide stated.