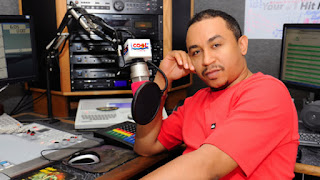 Daddy Freeze has narrated how an Okada rider saved him from angry mob in Lagos protesting the xenophobic attacks in South Africa.

According to him, he was on his way to see a movie with his family when an Okada rider approached him and told him not to go in the direction he was headed.

When he asked to know why, the Okada rider told him that the angry mob ahead might mistake him for a white man.

The Okada rider added that the mob were angrily protesting and looting stores perceived to belong to white men, and Daddy Freeze being of mixed race could be mistaken for one.

Freeze, who is part Nigerian from his father's side and part Romanian from his mother's side, said he was dumbfounded at this because he's not white. He explained this to the bike rider but the man and others warned him that the protesters will not hear this explanation before they strike

This is coming after Daddy Freeze vowed to boycott South African products.

”After seeing the pictures and videos, I have made up my mind! Personally, I have boycotted South Africa and gradually I’m boycotting all South African products. I won’t enrich a nation that treats my brothers and sisters like animals. ~FRZ”

According to Freeze, Nigerians were protesting the xenophobic attack on Nigerians in South Africa by attacking white men from the West and also Indians, Lebanese and other foreigners of a difference race from us.