Why we closed our embassy in Nigeria – South Africa


The South African Acting High Commissioner to Nigeria, Bobby Moroe, on Thursday confirmed the closure of the country’s missions in Nigeria.

Ms Moroe told News Agency of Nigeria in Abuja on Thursday that the closure was sequel to the directive from his country’s government.

The envoy said she had subsequently directed the Abuja and Lagos offices of the mission to suspend all consular activities until the situation improved.

The acting head of mission said that the closure was necessitated by fear of attack by some Nigerian youths. 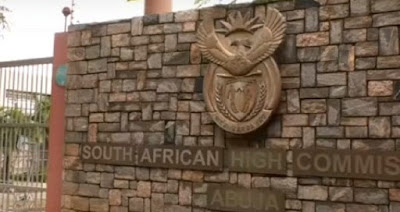 The South African Government had in a statement by Naledi Pandor, the Minister of the Department of International Relation and Cooperation, on Thursday announced the closure of its Nigerian mission.

Ms Pandor expressed disappointment over the decision to support the closure of the South African High Commission in Abuja and the Consulate in Lagos.

She said both offices were closed following concerns reported to the minister by officials working in those places.

Ms Pandor said the closure “followed the receipt of threats against mission staff as well as the property of South Africa’’.


“After extensive consultations with relevant stakeholders as well as a security assessment of threats, the mission and the department took the decision to close the offices.

“At this point, there has been no direct physical threat to any of our diplomats and citizens.

“However, we view their safety as a priority and have thus taken the precautionary measure of closing while the situation remains somewhat unpredictable.’’

The official expressed displeasure at misleading reports circulating on social media about a direct physical attack on the acting head of mission.

She described the reports as totally false.

“Our acting head of mission is in constant communication with the department and with the authorities in Nigeria, who are providing extra security at South African offices.

“The department has received reports of marches by demonstrators to South African companies as well as attempts to attack them.

“We are communicating with businesses that have branches in Nigeria and have requested their senior managers to remain in close contact with the department and the ministry,” she said.

She said tradition in foreign policy provides that diplomatic missions enjoy protection from host countries but added that the department remained perturbed at threats directed at the mission.

“We are grateful to note that the security forces and the government of Nigeria are upholding this long-established practice of foreign policy.

She, further, confirmed directive to the mission that links be encouraged between the youth of South Africa and Nigeria and that the Nigerian students’ association visit South Africa.

She said that several meetings with students’ organisation were held at the mission and that a committee had been established to sustain their dialogue and work towards the proposed visit.

Ms Pandor said the department and the ministry would remain in constant contact, continue to assess the situation on ground and provide feedback as new information was made available.

She, however, said that the ministry planned to meet the African Heads of Mission to South Africa next week. (NAN)