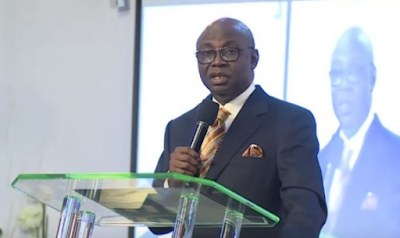 Tunde Bakare, the senior pastor of Latter Rain Assembly, says he has not granted any interview on the issues involving Vice-President Yemi Osinbajo.

“I believe the government is perfectly capable of addressing the issues,” he said.

“I have not and I am not granting interviews on this current VP saga. If, however, my counsel is sought at all, I will handle that confidentially and not in public.”

He asked the public to disregard any interview he is said to have given over the raging matter.


Meanwhile, an old video recording in which Bakare declared he is “number 16” after President Muhammadu Buhari, who he says is “number 15″ in the ”scheme of things”, is spawning a chain of reactions on social media.

Although the recording was in February 2018, a year before the 2019 presidential election, it resurfaced at the weekend — stoked by speculation that he might be picked by the president to replace Osinbajo.

In the video, Bakare described Buhari as Moses, who will take Nigerians to River Jordan, and himself as Joshua, who will take citizens across the river to the promised-land.

”Take it to the mountaintop, if you have never heard it before, I’m saying it to you this morning; in the scheme of things as far as politics of Nigeria is concerned, President Muhammadu Buhari is No 15, and yours sincerely,  I’m No 16. I have never said that to you before. I make it plain this morning, nothing can change it; he is No 15 and I’m No 16,” he told to his congregation.

”To this end was I born, I have prepared you for this for more than 30 years. That is why he wants to run in 2019, I do not oppose; he is still No 15, it is when he steps out that I step in. His assignment is that of Moses to take Nigeria to River Jordan, but he can’t cross it, it will take a Joshua to cross to the other side and begin the distribution of resources to the people of this nation.”

Bakare referred to the president as No 15 in the political order. But was he implying Buhari is the 15th president/head of state or was he speaking in terms of the number of tenure?

Going by the number of presidents Nigeria has had since it became a republic in 1963,  Buhari will be 7th, if Nnamdi Azikiwe and Ernest Shonekan are factored into the mix.

However, going by the number of Nigeria’s heads of state (both presidents and military rulers), Buhari is actually No 15, if his stint as military ruler in 1983 is counted.