Whoever is denied an education is denied almost everything, says new UNGA president 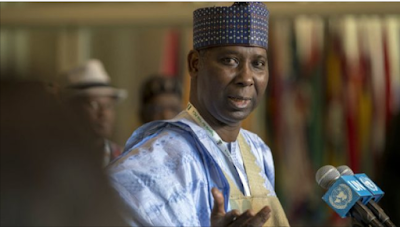 Tijjani Muhammad-Bande, the president of the United Nations General Assembly (UNGA), says whoever is denied education is denied almost everything.

Muhammad-Bande, who is Nigeria’s permanent representative to the United Nations, committed to poverty eradication, quality education, and inclusion as his top priorities at the helm.

Speaking in his first major interview with the UN News, the new president said “people are born into certain position. It’s only education that equalizes everything and everyone”.

When asked about what he would like his legacy to be at the end of his tenure, the political science expert said he would seek to make things easier for his successor.

“I think I would not want to give a broad view of what to do other than to say that we would want to know that as a team, and part of a team, we have pushed those matters of importance to the world, in a fair and transparent manner.

“And that whoever comes after us will find it easier to address some of these issues going forward.”

SPEAKS ON BEING UNGA PRESIDENT WHEN UN IS 75


Muhammad-Bande said there is a lot of excitement around the UN at 75, but he hopes the anniversary will remind the UN of its purpose, promise and limitations.

“We have had a few areas in which we didn’t do as well concerning, for example, genocide in Rwanda. There are many other areas in which, for example, norms concerning health issues and pandemics, issues relating to agriculture, issues relating to counter-terrorism, there is an emergent view, and, some constraints concerning the need not only to work together, but also (take) action on the ground on these matters.

“There’s a lot of excitement around the system and outside the United Nations itself concerning the need to mark this 75th anniversary as important in the history of the Organization and of the world and of politics in general.

“It should remind us as to the purposes of the Organization, its limitation and its promise and this promise is what we should all keep in mind.

“It is a celebration – to celebrate multilateralism and also to look at forces that hinder our full achievement of multilateral approaches to solving some of the problems.”

The UNGA president is a polical science expert with a B.Sc from Ahmadu Bello University, Nigeria, an MA from Boston University in the United States, and a Ph.D from the University of Toronto, Canada.