‘What’s he going to say?’ —Outrage as UNILAG invites MC Oluomo to school as special guest 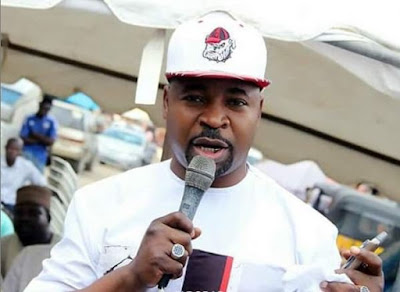 Musiliu Akinsanya, better known as MC Oluomo, has sparked arguments on social media after he was invited to an event organized by the University of Lagos (UNILAG).

A poster image for a seminar organised by the Lagos-based varsity had surfaced online on Wednesday in which the leader of the Nigerian Union of Road Transport Workers (NURTW), the state chapter, was listed as one of the special guests of the day.

MC Oluomo’s invitation has, however, led to disagreements on social media platforms, especially Twitter, where some users have questioned his “personage” and registered their disappointment.

While some users wondered why a renowned varsity “would stoop so low to invite a thug”, there was a segment of Nigerians on the micro-blogging platform who welcomed the decision, since the event borders around a field in which the NURTW leader has some wealth of experience.

“Mc Oluomo, a guest speaker in a uni campus? What exactly is he going to say to students?? This country na cruise,” a Twitter user said.

“University of Lagos inviting a thug, MC Oluomo as a guest speaker & people are saying its cos he is knowledgeable. On what? No wonder we call on past leaders who have looted & destroyed this country before to still lead us now cos a person’s image isn’t relevant in Nigeria,” another user said.

“There’s actually nothing wrong in inviting MC Oluomo to speak at an event in UNILAG. The fact he’s a NURTW chairman doesn’t mean he’s a blockhead. He also has 1 or 2 things he can teach people and they’ll appreciate. Y’all should stop stereotyping. BTW, MC Oluomo 4 Gov. soon,” a user also said.

In June, the NURTW leader was the subject of discussion after a photo of his honorary visit to the state of Atlanta, Georgia in the United States went viral.

University of Lagos inviting a thug, MC Oluomo as a guest speaker & people are saying its cos he is knowledgeable. On what?
No wonder we call on past leaders who have looted & destroyed this country before to still lead us now cos a person's image isn't relevant in Nigeria. pic.twitter.com/eyAtS1nHVs
— 👑 OLUWAFIFUNMI 🎨🇳🇬 #BBNaija (@FifunmiRexx) September 19, 2019

I don't see anything wrong in UNILAG inviting MC Oluomo to come speak at an event organised by their transport department. Mc Oluomo is educated in his field.
— Wale Adetona (@iSlimfit) September 19, 2019

MC Oluomo will give Unilag 5M
Those that invited him together with the ogas will share 3M
They will give the remaining 2M to the institution
10 students will vow to be like MC Oluomo after graduation
At least 7 will eventually be
The evil of today will produce evils tomorrow.
— Emmanuel Olabayo (@bayonuels) September 19, 2019

Here we go again Nigerians thinking that the only way u can get educated is through schooling. That's the biggest trap of the century. We get educated by getting knowledge which can be available everywhere. MC oluomo is super qualified and experienced to speak in unilag.
— Snitch Bitch (@junnielexia) September 19, 2019

So MC Oluomo is a "Special Guest" at a university event.

As @EuginhoCortez likes to say, we will surely reap the outcomes we are currently sowing.

What this clearly tells kids is that thuggery and anti-intellectualism are to be rewarded with high status in Nigeria.

I don't know why you people are angry at MC Oluomo being invited as a guest speaker at the university of Lagos o. What did you expect in a country that a certificateless man like @MBuhari is a president? Anything goes here guys, be calm abeg.
— Benny Umoren (@BennyUmoren) September 19, 2019

MC OLUOMO will be appearing as a special guest at UNILAG.

A known thug & political weapon of destruction getting called to appear in front of students.

This only proves education isn’t everything. The students who’re on the path to thuggery will have firm assurance.
— Iyá Lájè Of Lagos (@newscantell) September 19, 2019

Saw MC Oluomo trending, checked and I’ve been laughing my ass off since.

See ehn, maybe I have lost every fight in me, but I have come to terms with the fact that everything is possible in Nigeria now.
— Cross˚ (@Elcrucifixio) September 19, 2019

Mc oluomo:
Do not limit yourselves
U can do great things like I am doing
Student:
What made u a wealthy man
Mc oluomo:
Determination, focus
Vc: pic.twitter.com/aHkeItRsCL
— Muku fresh (@FreshMuku) September 19, 2019

The rottenness the decay in Nigeria is beyond imagination 😭 pic.twitter.com/z794NRB6V3
— Musical Critic (@MusicalCritic) September 19, 2019

Nothing wrong with MC Oluomo getting invited as a Guest speaker at Unilag...

He is good at whatever he is doing as NURTW Chairman....still a thing or two to learn from him.

Moreover...Unilag has a lot of potential thugs..🤣😂

Student will start seeing MC OLUOMO as their role model. 🤗

It’s only in Nigeria somebody who got no degree will be invited as a guest in a university to represent what ?
— QUDUS (@QdPaper) September 19, 2019

MC Oluomo is a warrior,who fought a gud fight.He changed d whole oshodi nation.
With al this am stil tinkin
Wat does he have in his head to share? Well, hw to stab & kill,hw to b a national thug & students in universities wil want to hear ur voice
What a thug u wanna be #Unilag pic.twitter.com/yD580oAvP7
— Alade Oluwasegun (@Shegs_McKing) September 19, 2019

On this Mc Oluomo I disagree with most people. President Kennedy while speaking at University of California once said University campus is a place where ideas are to be shared and debated, if the organizers believe Mc Oluomo has an idea to be shared, why shouldn't he be invited.
— Bamogil properties (@naijafrontier) September 19, 2019

MC OLUOMO is a stakeholder in d Lagos state transport sector,he is an employer of labour,he is a contributor of IGR ,we don't have to demean them,they are professional in a their chosen field.
— wunmylaw (@wunmylaw) September 19, 2019

What is wrong with MC Oluomo as a guest speaker in a university? What he knows about transportation in Lagos State and Nigeria are not being taught in the school curriculum. You think everything is formal education?
— onafowokan (@onafowokan3) September 19, 2019

MC Oluomo is trending & when you check why that is, it will only buttress the point that Nigerians deserve the leaders they get. There is nothing that is impossible when it comes to those that can become who the masses choose, irrespective of what they have done or who they are.
— 👑 DaddyMo 👑 (@therealdaddymo1) September 19, 2019

It appears most of you don’t even know who MC Oluomo is! He is not the one in suit and tie. You are calling someone illiterate but you cannot differentiate between a special guest and a guest speaker!! Even if you must drag everything drag with some intelligence. pic.twitter.com/XLBepY5BWA
— EJA NLA 👑 (@Kayloaded1) September 19, 2019

MC Oluomo aside , my organization organized a programme here in Oyo in 2016 on kidnapping along Oyo-Ibadan way . We invited security officers, NOA and NURTW chairman of the zone . The kidnapping was said to involve Micra and bus drivers. In fact , NURTW gave the topnoch tips.
— Alabi Oyo ♻ (@Humblesoul01) September 19, 2019

Y’all don’t even know the reason why MC Oluomo is invited to Unilag to speak, the program is on transportation and he can give an insight about Lagos state transportation systems.

But your ignorant self and clout you’re chasing won’t let you make findings.
— Ayoola (@i_olaelixir) September 19, 2019

Transport department of UNILAG invited MC Oluomo who is the NURTW top Dog to come speak at an organized event and you feel he’s not worthy enough?

Some of you are just clout chasers and stupendous ignoranmus set of people.
— BILLION DOLLARS (@Pinkbee_) September 19, 2019

Is it not the same University Graduates that Defend Buhari for not having a WAEC certificate tho, so why will MC Oluomo be an exception. Please talk about your incoming Lagos Governor with Respect Darling. The Game is the Game & you hate to see it 🤗
— King N●-N● 🌟 (@Zaddy_nomso) September 19, 2019

MC Oluomo aside , my organization organized a programme here in Oyo in 2016 on kidnapping along Oyo-Ibadan way . We invited security officers, NOA and NURTW chairman of the zone . The kidnapping was said to involve Micra and bus drivers. In fact , NURTW gave the topnoch tips.
— Alabi Oyo ♻ (@Humblesoul01) September 19, 2019