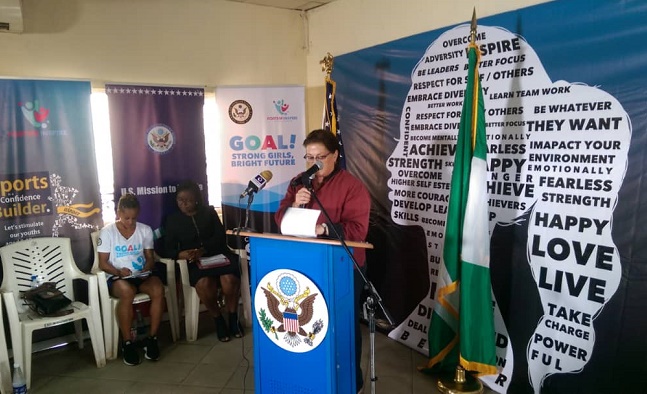 The United States government has launched a football mentorship programme for girls as part of its diplomatic efforts to tackle the menace of sex trafficking in Nigeria and other parts of the world.

The launch, which was presided over by Claire Pierangelo, the US consul general in Lagos, on Monday, held at the Campos mini stadium in Lagos Island.

It witnessed the engagement of 50 public school girls from Lagos in a programme “devoted to highlighting the importance of employing sports in the development of leadership skills, promoting health and wellness, and encouraging academic success.”

Among those who were present at the event are Staci Wilson and Joanna Lohman, two US sports envoys, who are former members of the country’s women’s national team; Joanna Lohman, a global sports diplomat; and Precious Dede, former Super Falcons goalkeeper.

Speaking at the event, Claire reiterated the US government’s commitment to combating sex trafficking through the prosecution of offenders.

She also commended the efforts of the federal government in that regard, but stated that citizens of the country have an integral role to play.

“Sports Diplomacy is an integral part of our efforts to build even stronger relations between the United States and Nigeria. It uses the universal passion for sports as a way to transcend differences and bring people together,” she said.

“Participation in sports teaches leadership, teamwork, and communication skills that help young people succeed in all areas of their lives and our envoys are to not only teach these girls football skills, but also to engage young women on a very important topic – human trafficking.

“The U.S. government is committed to combatting this form of modern slavery through the prosecution of traffickers, the protection of victims, and the prevention of human trafficking. Through programs like this, girls become aware of the dangers of trafficking, how to detect and prevent it, and better protect themselves.

Chisom Ezeoke, a sports journalist involved in global mentoring programmes, expressed enthusiasm about the prospects of the scheme.

She stated that it saw them scout for 50 girls from Lagos and a total of 120 from eight different schools in Benin.

“We know that Nigeria, especially Edo state, is widely seen as the headquarters of sex trafficking and this is something that bothers us greatly. Sport is such a powerful tool to impact lives. It’s very nice to have the US Consulate partner with us. We’ve done this programme for two years, this is the third and girls are getting a lot more from this than they have over the years,” she said.

“We scouted for 50 girls in Lagos and 120 from eight different schools in Benin. Very few female role models in sports are available to the girls. But, now, they’re meeting people who have had success stories playing sports. Imagine what it would do to them in terms of their confidence. This way, we can change the lives of more.”

On her part, Staci Wilson, a football training consultant and former professional footballer in the US, said the mentoring program would also serve to stimulate the interests of the girls into exploring other professional gains that come with being a footballer aside from the career in itself.

“Football is a piece of the puzzle when it comes to stopping sex trafficking among young girls because part of what happens is that they’re in this situation where they lack confidence and self-esteem. There are social rewards from the game and I’ve benefitted healthwise, mentally, and by meeting people,” she said.

“Another important aspect of this is that there are so many aspects to the game. There’s the coaching, there’s marketing, maybe you want to be a nutritionist. You can learn about it while playing being around the game.”

The mentoring programme, themed “Goal! Strong Girls, Bright Future”, is put together by the US Consulate and Fortem Inspire in partnership with the Lagos state ministry of education and the state’s sports commission.